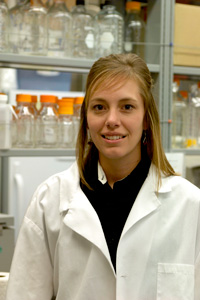 Tokach's experiences growing up on an Angus cattle ranch in Saint Anthony, N.D., gave her the ambition to move more than 1,000 miles from home.

From the view behind a chute on the ranch as she pushes calves through to be vaccinated to the view of a beef specimen behind her microscope, Rebecca Tokach has seen the cattle industry in a variety of formats.

"I always knew through being in 4-H and FFA that I wanted to be involved in agriculture, but I didn't know in what capacity that was going to be," Tokach said.

Her experiences growing up on an Angus cattle ranch in Saint Anthony, N.D., gave her the ambition to move more than 1,000 miles from home to get the best education possible and will continue to take her places she has never dreamed. This ranching background, combined with a love for agriculture and particularly beef cattle, fuels Tokach's desire to find a career that she will use to improve the livelihoods of both producers and consumers of food.

Her participation on the meats evaluation team and in a study abroad venture to Costa Rica while she was an undergraduate at Kansas State University allowed Tokach to realize the importance of meat science and for providing good, safe, wholesome products to consumers on a global scale.

"I think that opened my eyes to see how fortunate we are as American consumers and American producers for the meat industry we have here," Tokach said. "I knew that I wanted to be part of that research team to make sure we have the safest meat supply in the world."

Tokach completed her bachelor's degree in animal science and industry from Kansas State. She is now ready to graduate from Texas Tech with her master's from the College of Agricultural Sciences and Natural Resources' meat science and muscle biology program. At Texas Tech, she has worked for Brad Johnson, who she also knew at Kansas State as an undergraduate working in his growth and development lab. Johnson began at Texas Tech in 2008 as the Gordon W. Davis Regent's Chair in Meat and Muscle Biology. In addition to knowing Johnson before moving to Lubbock, Tokach said many other factors helped her choose Texas Tech for graduate school.

"There are so many resources at Texas Tech, whether it be financial resources, resources within our meat laboratory or interacting with people," Tokach said. "The professors were outstanding in how welcoming they were and also how well they knew the industry and what research needs to be conducted."

Research to Help Feed the World

In her research with Johnson, Tokach is studying how additives in cattle feed affect meat quality. Her work is two-fold. The first part of her research involves studying the beta-adrenergic agonist additive zilpaterol hydrochloride, commonly known in the beef industry as Zilmax, which is an FDA-approved product that helps improve average daily gain and muscling in beef cattle. While Zilmax increases muscling and helps cattle grow faster, it also has been linked to the decrease of meat tenderness and marbling, or fat within the muscle, which gives beef its flavor. Tokach is trying to further understand why and how Zilmax affects the animal.

In the second part of the project, she is looking at how chromium propionate, another feed additive that may help increase marbling in the meat, can be fed with Zilmax to offset the decrease in marbling and help cattle produce more meat that is still tender and flavorful.

In addition to having the safest meat supply, Tokach said Americans are fortunate to have many choices when purchasing meat in the grocery store. There are many high-quality, tender, flavorful products out there, but researchers have to find ways to provide more beef to feed a growing world population. Studying the affects of feed additives and food safety issues will continue to be important in the field of meat science.

"The research I'm conducting is helping us increase those meat yields so that we have more food to feed the rest of the world," Tokach said. Tokach has presented her research thus far at the American Society of Animal Science meeting in Denver and at the Reciprocal Meat Conference in Lubbock last June. 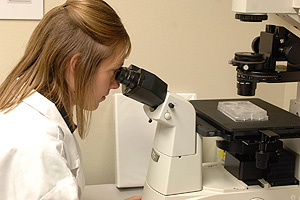 Tokach served on an assistantship at Texas Tech, which allowed her to work on several other research projects.

Tokach served on an assistantship at Texas Tech, which allowed her to work on several other research projects with faculty and graduate students and also work as a teaching assistant for Jessica Starkey's growth and development class. She said she has worked 12 hours a day, seven days a week in her assistantship role, but she treats the position as a job to get the research done.

The assistantship, as well as other scholarships and support from the beef industry, has given Tokach the financial support she's needed to pay for her education. Her assistantship has allowed her to attend the National Cattlemen's Beef Association Convention, Texas Cattle Feeders meetings and other conferences.

"Those are opportunities not every graduate student gets, or they have to pay out of their own pocket," Tokach said. "Texas Tech has really helped me in being able to do that."

Tokach was a recipient of numerous scholarships and awards, most recently being awarded one of two national W.D. Farr graduate fellowships sponsored by the National Cattlemen's Foundation. The award of $12,000 is given to two graduate students who are doing research to improve the beef industry.

Upon graduating from Texas Tech, Tokach said she intends to complete a doctoral degree in animal and food sciences and eventually work in the industry for a meat packing plant or distributor. After working in the private sector as a researcher, Tokach would like to work in a university setting. "I love working with students," she said. "I had great mentors myself, and I would love to give back in a way they gave to me."

Johnson has been one of those great mentors to her. Tokach said he has helped her see what it's like to balance research, family time and a personal life by being a great example of that balance. Tokach said Johnson also understands the value of applying the research he does to the real-world setting.

"Dr. Johnson has a great talent of taking the research he does that seems so far away from producers and bring it back home," she said. "So people like my dad, a rancher back in North Dakota, can understand what we're trying to do and how we're trying to benefit them."

Although Tokach never dreamed of becoming a meat science researcher growing up on her ranch in North Dakota, she now knows she's following her calling and what she's meant to do. Graduate school has challenged her and allowed her to develop the critical thinking skills she can use in and out of a research laboratory. She said knowing the practical and scientific aspects of agriculture, which she's gained on the farm and in the classroom, will help her greatly in her career. Tokach is glad she chose Texas Tech because of the collaborative opportunities throughout campus and the great people with whom she's worked.

"The opportunity to become a tier one school has benefited the animal science department, and there are many chances for new graduate students to come here and at least take a look at the programs, whether they be in animal science or outside of animal science," Tokach said. "The professors here are outstanding, and it's a really great university."