The documents helped Tuyen Nguyen find his long-lost friend after being separated by events of the Vietnam War in 1968. 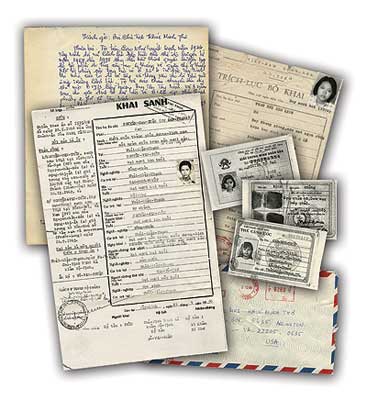 Forty-two years ago, Tuyen Nguyen hoped one day he would see his friend again, but he couldn't be sure. Nguyen, now a professor in Toronto, Canada, looked for his former classmate, Pham Quang Minh, since the two became separated by events of the Vietnam War in 1968.

The search became increasingly difficult after the Fall of Saigon on April 30, 1975, and subsequent end of United States involvement in Vietnam. That is when thousands of South Vietnamese were placed in reeducation camps operated by the Vietnamese government. Then, during the 1980s and 1990s, the Families of Vietnamese Political Prisoners Association Collection (FVPPA) helped more than 10,000 former Vietnamese reeducation camp detainees immigrate to the US and other countries through the United Nations High Commissioner for Refugees Orderly Departure Program (ODP).

The FVPPA collection was opened to researchers on Dec. 1, 2008, and within six months, another former Vietnamese reeducation camp prisoner had won political asylum thanks in part to those documents. With research assistance provided by the Vietnam Archive, the attorney seeking asylum for his client in this case was able to successfully prove that his client had been in the reeducation camps, and that former Vietnamese political prisoners and their families continued to endure hardships and prejudice after their release.

Nguyen hoped for similar success in the search for his friend. He tried a new approach by searching the FVPPA documents for Minh's older brother, Pham Van Sat, a former major in the South Vietnamese Marine Corps who had also been a political prisoner sentenced to reeducation in the Vietnamese reeducation camps after the war. Nguyen had heard that Sat had resettled in the United States after his release, and hoped FVPPA had been the organization to assist him.

Archivists at the Vietnam Center and Archive did locate an ODP application belonging to a Pham Van Sat. And Nguyen was certain this was the same man he was looking for. The papers did not list an address of relocation, but it did identify the applicant's sponsor. Remarkably, that sponsor had not changed residence in the 21 years since Sat filled out the application. Nguyen was able to contact the sponsor, locate Sat, and ultimately reconnect with his friend, Minh.

Nguyen hopes that other Vietnamese will learn of the collection so they might also be able to find their lost friends and relatives.

"It is a very good job to help other people to be united with each other again after having been separated from each other for a long time," Nguyen said.

Steve Maxner, director of the Vietnam Center and Archive at Texas Tech agreed.

"This is a wonderful example of the promise this collection holds for our Vietnamese American communities in the U.S. as well as for scholars and researchers more broadly," Maxner said. "We are very proud to be working with our partners in making these documents more accessible via the Internet and welcome users to contact us if they need assistance using these precious historical records."

In recognition of its importance, the National Historical Publications and Records Commission (NHPRC), the grant making arm of the National Archives, highlighted the collection in its annual publication, The American Record alongside other important preservation efforts such as The King Papers project (Martin Luther King, Jr.), The Presidential Recording Program, and many others. The NHPRC awarded the Vietnam Center and Archive with a nearly $50,000 grant in May 2006 to process the FVPPA collection.