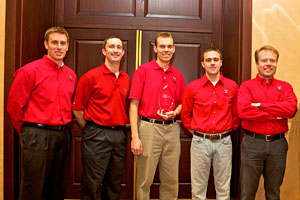 Graduate students from Texas Tech were asked to produce a video and complete the competition after their 2010 essay placed in the Top 15.

Would you rather retire in the lap of luxury, or just scrape-by to make ends meet? That is the question put forth in an essay and video by Texas Tech graduate students Ben Cummings, Chris Browning, Shaun Pfeiffer and Tom O’Malley, with help from Michael Finke as their faculty advisor.

In the summer of 2009, a group of concerned citizens from Green Bay, Wis., with the support from various local organizations, gathered to discuss how they might engage the so-called Y or Millennial generation to think about their own future, 40 years from now. It was their belief that, as individuals, this generation owes themselves a bright future. From that, the iOMe Challenge was born (as in I Owe Me). The idea grew into a national contest and teams from across the nation rose to the challenge, with Texas Tech placing second last year.

Findings from the 2009 challenge, as well as widespread agreement among economists and public policy experts, indicates many Americans have not engaged in long-term financial savings at the rate they should to secure their financial futures. This could lead to long-term problems, not to mention a substantial burden on governmental budgets and social benefit programs.

Texas Tech was invited to produce the video and complete the competition after their 2010 essay placed in the Top 15. The finished production features Personal Financial Planning (PFP) Associate Professor Bill Gustafson and Gordon Hampton, director of professional alliances for Tech’s PFP program. Gustafson portrays a man struggling with a broken-down pickup and living in a shack, while Hampton resembles Rich Uncle Pennybags, the top hat-wearing icon from the game of Monopoly.

Final entries will be judged by a iOMe Challenge’s Blue-Ribbon Judges Panel consisting of: