This was the team's first victory of the year. 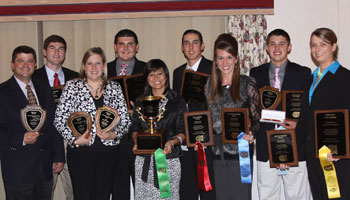 Texas Tech broke the tie with Colorado State University by winning the reasons score by a 27-point margin.

The Texas Tech Meat Judging Team broke a tie to secure its first victory of the year in Wyalusing, Pa.

After tying with Colorado State University for top honors, Texas Tech broke the tie by winning the reasons score by a 27-point margin.

"The team members have really committed themselves to reasons," said Mark Miller, professor and coach of the team. "That's what pulled them through at this contest."