The team has been victorious at Omaha's American Royal for the past three competitions. 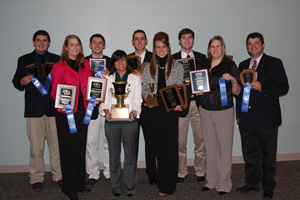 With triple wins the meat judging team has the honor of retiring its trophy.

The team posted a 15-point victory over its closest competitor and also placed first in both the pork judging and reasons divisions. Because this was Texas Tech's third victory at this contest, the team had the honor of retiring the trophy.

"This is an extremely deep team," said Mark Miller, professor and San Antonio Livestock Show Distinguished Chair in Meat Science. "They are constantly pushing one another to make the entire team stronger and better."