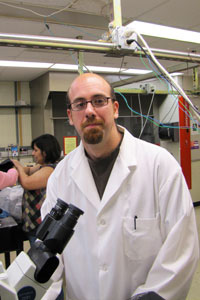 Dimitri Pappas received the three-year grant to study how the body kills off cells and how that knowledge may be used to develop new treatments.

A chemistry researcher at Texas Tech received a $520,000 grant to find better methods of studying cell death that could lead to more useful medications for ailments such as heart disease and cancer.

Dimitri Pappas, an assistant professor in the Department of Chemistry and Biochemistry, received the three-year grant from the National Institutes of Health to study how the body kills off cells and how that knowledge may be used to develop new treatments.

Known as apoptosis, it's the body's natural way of selectively killing off cells to balance cell growth. But when it's out of balance, Pappas said, it can lead to serious health issues.

Currently, ways to measure apoptosis are time-consuming and limit scientists' understanding of how it might be manipulated, he said. Pappas will use the grant to discover new methods to rapidly measure the rate of death in a number of cells.

The hope, he said, is to use the new methods in conjunction with medicines that offer more effective treatments. For example, chemotherapy kills cancer cells, but also kills many normal cells during the treatment. The new method could lead to the discovery of more targeted drugs that help speed up cell death in cancer cells rather than healthy ones.

Or, it could help develop a drug that could stop rapid cell death in patients with heart disease, he said.

"What this will realistically enable us to do is to test new drug compounds that will allow or prohibit apoptosis," he said. "We'll be able to weed out candidates faster."