The Double T Bench: A History Rich with Student Involvement and Tradition

When the senior class met in 1931, it came up with an idea to leave an impression on Texas Tech for future students to enjoy. 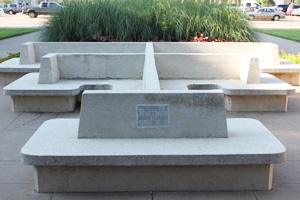 Donated to the university by the senior class of 1931, the bench has been a part of the campus landscape for more than 70 years.

Buried beneath the mysterious nature of the Double T Bench is a history rich with student involvement. Donated to the university by the senior class of 1931, the bench has been a part of the campus landscape for more than 70 years.

When the senior class met in 1931, it came up with an idea to leave an impression on Texas Tech for future students to enjoy. B.A. Brady, an architectural engineering major, was approached by his classmate Floyd Woolridge and asked to draw up plans for the bench.

After perfecting his plans, Brady presented his drawings at a senior meeting. During the meeting, he discovered two other architects had also been approached with the idea. In the end, Brady’s hard work paid off and the Double T Bench, with his original design, was erected on June 6, 1931, in the courtyard behind the Administration Building.

Brady, in a 1980 interview, said his plans were accepted because he worked hard to make the bench as large as possible.

“The spacing in there, to make that thing balance out,” he said, “it couldn’t be much bigger and it couldn’t be any smaller than what it is.”

At the time the Double T Bench became a campus structure, Brady said Texas Tech consisted of only nine buildings including the Administration Building, the powerhouse and a dairy barn. Since then, the campus has grown and changed so much he was not able to locate the bench he designed during a class reunion in 1980.

“I was trying to find it,” he said. “I wanted to see if it was still there. And lo and behold I got lost and drove around the campus for about 30 minutes. There’s a lot of difference in 50 years.” 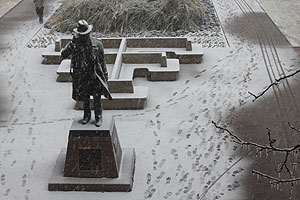 Through seasons and across decades, the Double T bench sits as a testimony to the rich history of student involvement on the campus.

Although Brady was never able to locate it that year, the Double T Bench remains a part of Texas Tech for all to enjoy and speculate about for years to come.

On campus, it is an announced tradition that no freshmen are allowed to sit on the Double T Bench, and it has also been reported that if a girl wants a date to a football game, all she has to do is sit and a date will find her. Luckily, students have an easier time finding the bench than Brady did.