In addition, the university also is listed in the A+ Schools for B Students category. 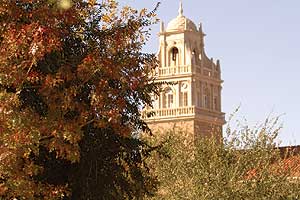 Texas Tech is ranked 159 out of the top 191 schools in the National University category.

According to the publication, Texas Tech sits at 159 out of the top 191 schools ranked in the National University category. Texas Tech also is listed in the A+ Schools for B Students category, which is alphabetical and not by rank.

“This year’s U.S. News and World Report rankings show our continued progress toward Tier 1,” said Texas Tech President Guy Bailey. “Over the last two years we have moved from 170 to 159. We have made good progress and anticipate better progress in the future.”

The increase in ranking is yet another example of how Texas Tech University continues to advance, said Chancellor Kent Hance.

“The university is achieving critical milestones in everything from enrollment to research, as well as retention and graduation rates. We are excited about making our way to the top of this list of elite universities.”

Over the past 26 years, the U.S. News college rankings, which groups schools based on categories created by the Carnegie Foundation for the Advancement of Teaching, has become one of the most comprehensive research tools for students and parents considering higher education opportunities. Among the many factors weighed in determining the rankings, the key measures of quality are: peer assessment, graduation and retention rates, faculty resources, student selectivity, financial resources, alumni giving and graduation rate performance (National Universities and Liberal Art Colleges categories).

This year the publication made some changes in its ranking methodology. In the Best Colleges 2011 edition, schools are designated National Universities, National Liberal Arts Colleges (last year it was Liberal Arts Colleges), Regional Universities (last year it was Universities-Master’s), and Regional Colleges (last year it was Baccalaureate Colleges). The number of colleges in the two regional categories did not change, and schools are still ranked in four regions—North, South, Midwest and West. The publication now numerically ranks the top 75 percent of schools in each category, up from 50 percent. The schools in the bottom 25 percent of each group are listed alphabetically as the Second Tier, previously called the Fourth Tier.

"Best in the West”: Texas Tech Named One of the Finest Colleges by Princeton Review