Richard A. Bartsch named to second class of Fellows for his work removing dangerous metal ions from wastewater. 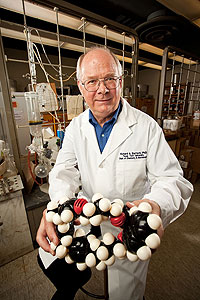 A Horn Professor of Chemistry at Texas Tech has been inducted into the 2010 class of Fellows for the American Chemical Society (ACS), the world’s largest scientific society.

Richard A. Bartsch was nominated by the Division of Industrial and Engineering Chemistry. This is the second class of Fellows since the program began last year.

“This is a great capstone to my career, because I’m going to retire after the end of the fall semester,” Bartsch said. “I’m just a regular guy, not a superstar. I’m very pleased to have this recognition. Looking back, I’ve had the best job in the world.”

He was honored in part for his 30 years of research into a certain type of chemical “doughnut” that can help industries remove dangerous metal ions, such as cadmium, lead or mercury, from wastewater.

These doughnuts, called ligands, fit like a crown and bond to the ions. When an organic solvent, such as kerosene, is placed on top of the water, the ligands extract the unwanted targeted ions out of the water by “floating” them to the top where they can be removed with the organic solvent.

One recent research project involved separating cesium and strontium from Department of Energy’s nuclear waste, he said. Because radioactive wastes are literally hot due to the strontium and cesium, they are difficult to dispose of easily.

“Strontium is fairly easily removed but cesium is a real problem,” he said. “We developed a superselective ligand called a calixarene that can remove cesium from the sodium matrix in which it’s imbedded. The ratio of sodium to cesium in this waste is about 10,000 to one. So, it’s a pretty amazing separation.”

The process markedly reduces the radioactivity level of the waste left behind, he said.

In the 34 years Bartsch has worked at Texas Tech, he has graduated 50 doctoral students and published more than 400 papers in professional journals.

The 2010 Fellows will be recognized on Aug. 23 during the society’s national meeting in Boston.

The Fellows program began in 2009 to recognize and honor ACS members for their outstanding achievements in and contributions to science, the profession, and the Society. This year’s group, like the first 163 Fellows named in 2009, represents academe, industry and government. Additional information about the program is available here.