Texas Tech announced the signing of an exclusive worldwide license agreement for a chemical additive that will battle antibiotic-resistant bacteria. 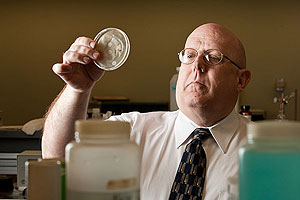 The agreement is with RI Scientific LLC for the development and commercialization of metallo-beta-lactamase inhibitors, short chains of nucleic acid that have demonstrated the ability to eliminate bacterial resistance to antibiotics.

“This technology is extremely important in terms of the number of people who can benefit from it,” said David L. Miller, vice chancellor for commercialization. “We believe that RI Scientific has the ability to work with a number of pharmaceutical companies through the clinical testing process to have the aptamers incorporated into many of the commonly used antibiotics that the medical community now depends on.”

The patented technology was developed by Robert W. Shaw, acting chairman of the Department of Chemistry and Biochemistry at Texas Tech, and Sung-Kun Kim, an assistant professor at Baylor University.

“The use of this aptamer may turn back the clock for many existing antibiotics that have lost their effectiveness due to the emergence of antibiotic-resistant bacterial strains,” Shaw said. “Beta-lactam antibiotics, such as penicillins and cephalosporins, account for billions of dollars in annual sales in the United States alone. Antibiotic-resistant bacteria present a major problem to the medical and pharmaceutical industries.”

When used in conjunction with these antibiotics, the aptamers overcome enzymes produced by resistant bacteria that allow them to survive exposure to antibiotics.

RI Scientific LLC is a biotechnology consulting company based in Cranston, R.I. It’s focused on discovering and commercializing drug therapeutics.