Ron Milam and Justin Hart spread their knowledge to Vietnam's educators in an intensive five-day course. 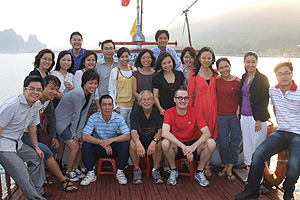 During the program, Vietnamese faculty spent more than 10 hours a day learning how to teach a course on international relations.

“It was probably the most rewarding thing I’ve done in my academic career,” Ron Milam, assistant professor of history, said of the intensive course.

Milam and Justin Hart, assistant professor of history, spent five days living alongside their pupils, some 30 Vietnamese international relations faculty who attended the May course.

And for more than 10 hours each day, they hashed out Cold War strategies, the rise and decline of European empires, marketing brand America and China’s sudden world emergence.

“They were very receptive and enthusiastic about what we were teaching,” Hart said of their students, university professors learning how exactly to teach a course on international relations: building a syllabus, evaluating courses or maybe even writing a textbook for undergraduate students.

“I think they all come out of a tradition of what you would call rote learning, where information is presented to them and they master it, so they were very much interested in learning new teaching methods,” Hart said.

Learning from the Past

Hart and Milam also taught the history of U.S. diplomatic relations from the nation’s founding through its current conflicts in Iraq and Afghanistan.

Milam said the students already had a strong grasp of U.S. history, though they did approach him between sessions to ask him further questions about subjects including the Vietnam War – or, as Vietnamese call it, the American War.

Milam and Hart were the first professors from Texas Tech to take part in such a course. They believe they may be the first Americans to ever teach such a course in Vietnam.

Steve Maxner, director of the Vietnam Center and Archive, and Khanh Cong Le, associate director for veteran affairs for the Vietnam Center and Archive, coordinated the trip, which was sponsored by the Ford Foundation and organized by the Diplomatic Academy of Vietnam with the coordination from Hanoi City University of Social Sciences and Humanities.

The trip has already paid dividends, Hart said, noting that the three of the participants are already looking into attending Texas Tech.

“I believe there will be an ongoing connection between the two entities,” he said. “The question will be how formal that connection is.”

Which is fine with Milam, who said he was impressed with the quality of the students.

“I spent a good part of my trip trying to recruit them to Texas Tech because they were outstanding,” he said.