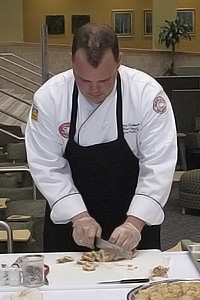 McMurrey will compete for the national NACUFS title in July in San Jose, Calif.

Chef Dewey McMurrey competed against five other chefs representing different universities in the southern region. McMurrey will vie nationally this July in San Jose, Calif. His winning dish was a portabella and spinach roulade. He had to prepare and have his entrée plated within one hour.

“It is a challenge for sure but, all in all, it is a great opportunity to compete, network with other professional chefs and ultimately do what I love,” said McMurrey.

Alan Cushman, business development administrator for Hospitality Services, said McMurrey's results were an accurate representation of what Texas Tech had to offer.

“Chef Dewey’s achievements truly represent the skills and talents that he possesses,” said Cushman, “Hospitality Services is proud to have him as part of our culinary team.”

McMurrey started his career at casinos in Montana in 1996 and continued pursuits in the hospitality industry. He graduated in the top 10 percent of his class at the Culinary Institute of America in Hyde Park, New York. He also interned at the Dallas Country Club under Certified Master Executive Chef Ernst Gruch. McMurrey arrived at Texas Tech in 2005 and has strived to make the campus lead the rest of the nation in university food service.

Hospitality Services promotes each student's learning experience by nourishing the minds of tomorrow.