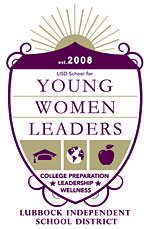 The Margaret Talkington School for Young Women Leaders is an all-girls college preparatory school supported by a collaborative public-private partnership between the Foundation for the Education of Young Women, Lubbock Independent School District and the Talkington Advisory Board.

The school is in its third year of operation and currently houses sixth-, seventh- and eighth-grade students. The school anticipates growing a grade level each year until reaching 12th grade.

The school’s principal is
Kim Perry, a graduate of Texas Tech University.

The Real Washington: Interns Set to Get Up Close and Personal with National Politics 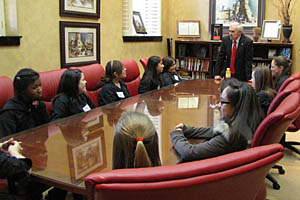 President Bailey visits with student council members from the Talkington School for Young Women Leaders during their visit to campus.

Twelve seventh- and eighth-grade student council members from the Talkington School for Young Women Leaders received a firsthand look at the inner-workings of Texas Tech administration during their recent visit to campus.

The girls had the opportunity to sit down with Guy Bailey and pick his brain about the role of a university president and working with students and their families.

Bailey stressed the importance of being aware of opportunities available and encouraged the students not to be afraid to take chances on those opportunities.

“Somebody asked me once, ‘did I ever have a plan for stuff,’ and I really didn’t,” Bailey told the students. “But the one thing I did do, was when an opportunity came open, I took advantage of it. That’s kind of hard to do sometimes because you have to take a leap of faith. But sometimes you have to move to places where you don’t know people and take a little bit of a chance. And the one thing I would always do is take a chance.”

Bailey said he thoroughly enjoyed the visit from the students and was extremely impressed by them.

“The Talkington School is doing a great job preparing leaders for tomorrow,” he said.

The students visited with the Office of Communications & Marketing about the use of emerging media in administration, and also met with several Student Government Association (SGA) senators who spoke to them about responsibility and dedication.

Martin, who will graduate in May with a degree in history, said student government has been her passion, and she would like to share her love for SGA and Texas Tech with her students.

"I have learned a lot from my experiences with student government; about dedication, responsibility and heart. If you want something done you need to have a drive for it, a true will and desire to make a difference. I want my students to understand that sometimes things don't always work out as planned, but they need to keep pushing and keep shooting for the stars."

Talkington student council sponsor, Corey Butler, said Texas Tech has been an amazing resource to have only minutes away from campus.

“We are very fortunate that Texas Tech has taken an interest in our school and goes out of its way to help us with what we need,” said Butler. “I don’t know if many schools can say that about their local universities like we can.”

The girls received T-shirts, bags and Masked Rider masks, which some donned for the rest of the tour.

“The girls had a lot of fun and learned so much,” Butler said. “I think they took home with them a feeling of responsibility to their campus and student body. Bailey and the SGA gave several challenges to our students about making our campus better, which struck a chord with them.”