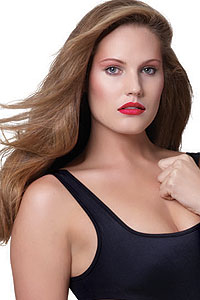 Alexandra Underwood is a senior broadcast journalism major from Kerrville. Connect with her on Facebook.

Alexandra Underwood almost hung up on her future.

When she got a call from Los Angeles telling her she’d earned a spot on Cycle 14 of “America’s Next Top Model,” the senior broadcast journalism major from Kerrville assumed it was a prank by her roommate and told the voice on the other end, “You’re lying!”

Indeed, the call was in earnest. Underwood, 21, is one of 13 contestants vying for approval from host Tyra Banks and a panel of judges. The show runs at 7 p.m. CDT Wednesdays on The CW.

Underwood said that being part of the show was a dramatic, sometimes gut-wrenching experience.

“The reason why it’s so stressful is you don’t’ know what the judges are looking for that week,” she said. “I’m my own worst critic. I’m extremely hard on myself. If I mess up anything in the slightest, I beat myself up for awhile. I’ve definitely learned to trust my instincts and go with my gut feeling. I think that would be the biggest thing I learned was just to trust myself.”

If it hadn’t been for an insistent family friend, Underwood’s shot at realizing her childhood dream to model might never have materialized, she said.

“She literally came and ripped me out of my bed,” Underwood said. “My mother’s friend just showed up. I said, ‘I don’t even have pictures or a portfolio.’ She said, ‘That’s OK. I already printed off pictures of you from your Facebook.’”

Underwood was one of many auditioning last spring at South Plains Mall and more than 11,000 from across the United States. Throughout the experience, she said, she’s learned that modeling isn’t the cakewalk she first expected.

In last week’s episode, Underwood’s strut down the catwalk turned catastrophic. Despite tripping down a staircase and getting walloped by a giant pendulum swinging across the stage, she held her composure through the pain of a cut knee and a torn dress.

“It’s definitely not as easy as it looks,” she said.  “In that clip, there was a lot left out. When I got back on stage I did a curtsey to the judges and walked off laughing. But they didn’t put that in there. I went in to this thinking modeling it’s going to be a cinch. I got a totally new awakening. Especially when the pendulum hit me.”

And living in the model house has proven an eye-opener as well, she said.

“All 13 of us are complete and total polar opposites,” she said. “There are none of us who are the same. I usually wake up on the right side of the bed. Most of these girls did not. That was really alarming to me. You never knew what you were going to get with these girls.”

Throughout her life, Underwood said her family has had the biggest impact on the person she is today.

“I think I’ve taken a lot from my family,” she said. “My parents have really been a huge influence on the person I am today. I’m really strong in my faith with God thanks to my Mimi. I think that being a classy woman is so important, and I certainly learned that from my grandmother. I take a little bit from everyone.”

Underwood said she grew up showing horses on her parents’ Kerrville cattle ranch. After winning a national championship in 2006, she came to Texas Tech University to try out for the Masked Rider and pursue her dream of becoming a broadcast sports journalist.  Though the show has sparked her interest in pursuing a modeling career, she said she still plans to finish her degree this year.

“I definitely have all the building blocks to have a really great modeling career,” she said. “It’s up to me how I play my cards.”