Who was Saint Patrick, really? 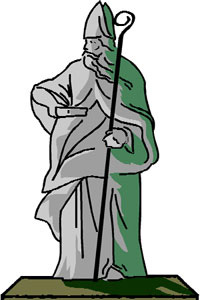 Think St. Patrick drove the snakes out of Ireland?

Some people do, said John Howe, a professor in the Department of History. But that’s hardly surprising when one considers the bigger-than-life legends this patron saint of Ireland produces.

“I guess it depends on whom you ask,” Howe said. “If you ask an Englishman, he might say that St. Patrick turned the snakes into Irishmen. When it comes to St. Patrick, it’s not always easy to separate out what is historical.”

Despite being one of the most widely known saints in Christianity, St. Patrick’s true life remains somewhat shrouded in mystery and washed over in exaggerated storytelling.

From taking credit for being the first Christian missionary in Ireland to using the shamrock as symbolism for the bible, there’s certainly no dearth of tales about St. Patrick, Howe says. That can mean trouble when it comes to finding the truth about the real historical figure.

Only two writings authored by the real St. Patrick exist.

The “Confession” and a letter addressed to the soldiers of Coroticus, an Irish chieftain, are the most solid guides historians use to develop biographical material about St. Patrick, Howe said. Some material in a collection called “Sayings of Patrick” also may be genuine. The earliest surviving biographies of St. Patrick were written more than a century after his death.

“Most historians accept that Patrick was kidnapped by pirates and hauled away from his homeland, which appears to be Wales, as written in the 'Confession,'” Howe says. “He spent six years in Ireland before escaping back to Britain.”

Somewhere between escaping from Ireland and returning home to Britain, many historians believe Patrick stopped over in France, Howe says. When organizing Christianity in Ireland, structure such as the system of bishops of the Roman Catholic Church on Europe’s continent are present in Patrick’s organization of Christianity in Ireland.

During the fifth century, Howe says, the Western half of the Roman Empire was collapsing and society on Europe’s continent was in turmoil. However, Ireland had never been under Roman control. This probably helped St. Patrick spread Christianity across the Emerald Isle because Christianity was associated with culture and literacy rather than Roman political authority.