Chemist David Knaff and a team of researchers have discovered a way to help scientists engineer stronger plants in the future. 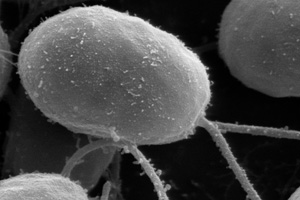 Chlamydomonas reinhardtii, a single-celled alga, was useful in the group's research because of its ability to reproduce quickly and because its genome has been entirely mapped.

By studying the natural variations of a plant protein called ferredoxin in a simple alga, researchers at Texas Tech and the University of California at Los Angeles discovered that one type of the protein was more effective at reducing nitrogen to ammonia – the main pathway that plants make energy.

David Knaff, director of the Center for Biotechnology and Genomics at Texas Tech, said genetic manipulation of this certain ferredoxin could make plants that grow better in areas with nitrogen-poor soil.

Ferredoxin is one of the major iron-containing proteins in photosynthetic organisms and plays a central role in converting energy from the sun into usable chemical energy, Knaff said. The protein serves as the central hub for donating electrons for any chemical process that requires them in photosynthesis.

Knaff said the team wanted to discover what different forms of ferredoxin do in the single-celled alga called Chlamydomonas reinhardtii.

The alga, nicknamed “chlamy” by scientists, is useful because of its ability to reproduce quickly and because its genome has been entirely mapped, he said. But for such a simple plant, it contains six types of ferredoxin proteins compared to more complex flowering plants, which typically contain only two ferredoxins in their leaves.

“The plant wouldn’t go to the trouble of making six different ferredoxins when most plants only have two,” Knaff said. “This plant should be able to get by on one, really. So we wanted to find out why it makes six and what those six do.”

Researchers attempted to discover differences in various types of ferredoxin by pinpointing their roles in different metabolic pathways. Their initial findings showed that several types of ferredoxin were similar in combating oxidants – free radical compounds that cause aging in cells.

However, ferredoxin 2 was more effective in reducing nitrate to ammonia. Knaff said this surprising discovery could lead to genetically engineered plants that could improve agriculture in areas with nitrogen-poor soil.

More research is needed to fully understand or manipulate ferredoxin proteins, he said.

Their findings were published in the Journal of Biological Chemistry.

Center for Biotechnology and Genomics