While baseball was considered an all-American sport, racial segregation excluded blacks from an otherwise democratic picture. 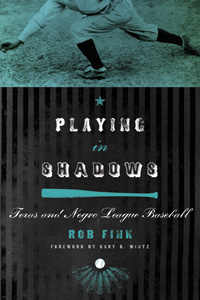 Soon after the Civil War in the first professional baseball match-up in Texas, the R.E. Lees faced the Stonewalls, and Blacks played no part. It would not take black players long to pick up the game and to develop a tradition separate from the major leagues.

In a state that eventually produced such greats as Rube Foster, founder of the Negro National League and pitcher “Smokey Joe” Williams, the story of baseball before integration is rich and revealing.

In “Playing in Shadows: Texas and Negro League Baseball,” author Rob Fink draws upon oral histories and mines such rare sources as rosters and box scores from black newspapers. From the Galveston Flyaways of the 1880s through Dallas shortstop Ernie Banks’ signing with the Chicago Cubs in 1953, Fink’s book brings to light an important but little-studied inning in American sport. Buy the book here.

The book, along with “Our White Boy” by Jerry Craft with Kathleen Sullivan, launches the Texas Tech University Press book series "Sport in the American West." The new series, edited by Jorge Iber, examines the impact of sport throughout the region and seeks to illuminate how sport intersects historically with such cultural issues as race, ethnicity, gender and class.

Rob Fink is the author of numerous articles and encyclopedia entries in black history. The Baylor University and Texas Tech alumnus lives in Abilene, where he is an assistant professor of education at Hardin-Simmons University.

Jorge Iber, associate academic dean of the College of Arts and Sciences, specializes in Mexican-American history. In recent years, he has combined his research with a new interest in sports and has produced various articles and two books on the history of Hispanics in U.S. sport.