In celebration of Women's History Month, Winona LaDuke will discuss the advancement of women in higher education. 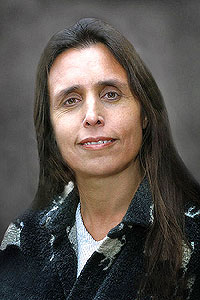 Winona LaDuke’s address is part of a day-long celebration sponsored by the Women's Studies Program.

The conference, sponsored by the Women’s Studies Program and titled “Regarding Nature: Gender, Identity, and Ecologies of Change,” is part of a day-long celebration recognizing and promoting contributions by, for and about women within higher education.

LaDuke is working on issues of sustainable development, renewable energy and food systems. She lives and works on the White Earth reservation in northern Minnesota, and is a two-time vice presidential candidate with Ralph Nader for the Green Party. As program director of Honor the Earth, she works nationally and internationally on the issues of climate change, renewable energy and environmental justice with indigenous communities.

In 2007, LaDuke was inducted into the National Women’s Hall of Fame, recognizing her leadership and community commitment. In 1994, LaDuke was nominated by Time magazine as one of America’s 50 most promising leaders less than 40 years of age. She was awarded the Thomas Merton Award in 1996, Ms. Woman of the Year (with the Indigo Girls in l997), and the Reebok Human Rights Award, with which she began the White Earth Land Recovery Project. The White Earth Land Recovery Project has won many awards, including the prestigious 2003 International Slow Food Award for Biodiversity, recognizing the organization’s work to protect wild rice from patenting and genetic engineering.

A graduate of Harvard and Antioch Universities, LaDuke has written extensively on Native American and environmental issues. She is the author of five books, including Recovering the Sacred, All our Relations and a novel, Last Standing Woman.

She is a former board member of Greenpeace USA and is presently an advisory board member for the Trust for Public Lands Native Lands Program as well as a board member of the Christensen Fund. She is widely recognized for her work on environmental and human rights issues.

The conference is an event open to the public. For more information, visit the event Web site or contact Patricia Earl.