A Texas Tech researcher compiled suggestions for parents that offer tangible forms of support to maintain a positive outlook. 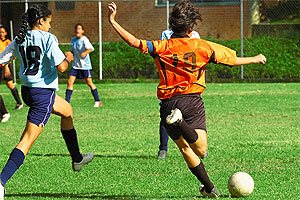 Injured teens often worry that their peers might view them as "weak" or "soft."

As the high school soccer team plays its last game to qualify for state, Katy watches from the sideline as her team plays. She wants to be on the field with her teammates, but she has a broken ankle.

She yelled at her mom and the doctor as he wrapped her leg in a plaster cast, not because of the pain, but because she couldn't play. Her team needed her and she hated letting them down.

When a teenager suffers a sports-related injury, many times their agony is more mental than physical.

Les Podlog, expert in Health, Exercise and Sport Sciences, said it is not uncommon for injured teens to feel like their peers might view them as "weak" or "soft." He said parents should expect this sort of mentality if their son or daughter experiences an injury.

Podlog, who recently wrote "What Can I Do to Help My Child? The Injured Adolescent Athlete and the Role of Parental Support," said the most imperative help parents can give is to listen to their kids and support them.

After researching the subject by interviewing parents of injured teenagers, Podlog compiled suggestions for parents that offer tangible forms of support to maintain a positive outlook.

What Parents May Not Know

Parents of athletes said one of the main concerns their teenagers had was missing the social aspect of their sport as well as the involvement with their team.

"They felt a sense of isolation from their peers in their sport and they were missing opportunities with their teammates," he said.

In addition, many parents claimed their adolescent children were eager to perform and show they had not lost their talent. This is due to "self-presentation" concerns, he said, which are very common among adolescents.

"People differ in terms of their motivations. When you’re a kid, your social image is more important to you than when you’re older," he said. "Because we’re aware that people make judgments on who we are, we do things to monitor or control the impressions that we make of ourselves."

One mother claimed her daughter felt pressure to participate just from watching her peers practice. She reported her daughter was having difficulty performing her separate exercises on her own time without having any team interaction.

Other parents said they actually performed the rehabilitation exercises with their kids because they knew they would not be inclined to continue unless someone else was there doing it with them.

Podlog said one of the most important things is for parents to understand the concerns and the pressure the adolescents are facing. Offering tangible forms of support was another suggestion from parents, like taking them to the doctor or physiologist, or simply by serving as a counselor while they deal with mental battles.

"A lot of what the parents focused on was simply talking to their kids, providing them with reassurance," he said.

"It seems like there are a lot of adolescents who get hurt playing sports," he said. "If there are simple things that can be done to enhance the recovery process, or make it easier, then it’s worth knowing."