Enjoy An Evening of 'Crooked Tunes' with the Celtic Ensemble

Singers and players will perform dances, songs, listening pieces and tunes reminiscent of the high hills and deep glens from across the Celtic world. 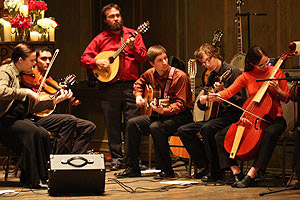 The Celtic Ensemble is a small group of singers, instrumentalists and dancers specializing in the traditional dance music and song of the seven Celtic nations.

Singers and players from Texas Tech University’s Celtic Ensemble will perform dances, songs, listening pieces and “crooked” tunes from across the Celtic world during “Crooked Tunes: From Brittania to the Balkans.”

"The kids in the Celtic Ensemble really like this music because it's in 'crooked' or asymmetrical meters,” said ensemble director Christopher Smith. “The dances that go with the tunes are really challenging and interesting. The ensemble members have been working on this stuff ever since October, and they're raring to go."

For millennia, across Northern Europe and into Ireland and the British Isles, music and dancing have been a central part of folk culture, he said. Hornpipes and “three-twos” from England, marches and reels from Scotland, barn dances and slip-jigs from Ireland, circle dances from Wales, an-dros from Brittany and xotas from Galicia have all been treasured and passed on across the generations.

The “crooked” character of many of these tunes both reflects the uniqueness of the dances they accompany, and captures the beautiful idiosyncrasies of the high hills and deep glens from which they emerged, Smith said.

"This concert is really a way for us to look beyond the nations of the Celtic world themselves and to see how these tunes and songs and instruments have linked-up with other folk traditions from across Europe,” Smith said. “We're interested in the ways that different music can communicate across linguistic and geographic boundaries. The dances and dance tunes have crossed borders. It's great music, and it just refuses to be confined to one place or people or political perspective. We like that."

These tunes have attracted musicians from Europe and beyond to share music and songs across cultural boundaries, he said. In this program, the Celtic Ensemble will draw upon the repertoires of groundbreaking cross-cultural musicians like Andy Irvine, Planxty, Moving Hearts, Kitka and Mozaik. The music traverses the knotty landscapes and crooked dance-tunes of Ireland and the British Isles, then points East – from Brittania to the Balkans.