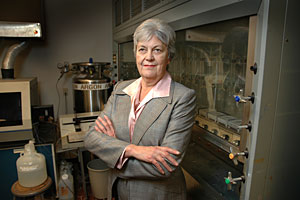 Vivian Allen is project leader for the two-year proof of concept grant, which focuses on how carbon cycles through large-scale agricultural systems.

A leading research scientist from the Department of Plant and Soil Science and her team have been awarded a $200,000 U.S. Department of Agriculture (USDA) grant to study how carbon cycles through large-scale agricultural systems.

Vivien Allen, a Horn Professor and the Thornton Distinguished Professor of Forages, is the project leader. The two-year proof of concept grant focuses on carbon cycling from the USDA-National Institute of Food and Agriculture (NIFA). The grant positions Texas Tech to compete for a 10-year, $1 million-per-year long-term agroecosystems science program proposal.

With increasing pressure on agriculture to meet global food, feed and fuel demands while preserving a healthy environment and sustainable natural resource base, understanding agricultural ecosystems at a landscape scale is becoming critically important, Allen said. Such understanding requires long-term field-scale research and demonstration that is rare because of the costs and commitments in terms of land, people and resources. The NIFA long-term agroecosystem program addresses those concerns.

“We’re able to assemble an incredible group of people who are world-class experts,” said Sukant Misra, professor and associate dean for research in the College of Agricultural Sciences and Natural Resources. “We believe this research provides major opportunities for understanding the structure and functional relationships of carbon cycling in an array of crop and livestock grazing systems.”

The venture will include both the long-term integrated systems research currently underway near New Deal and several producer demonstration sites within the Texas Alliance for Water Conservation project in Hale and Floyd Counties, Allen said. 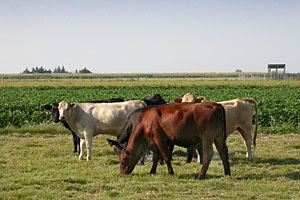 According to Allen's research, less irrigation water and less nitrogen fertilizer are required for a diversified cotton/livestock system over cotton alone.

Among the objectives of the program are to connect land managers with researchers who conduct scientific and cultural assessments of current and novel farming practices, as well as to educate and extend scientific knowledge to improve cropping and tillage systems so that they are ecologically, economically and culturally sustainable, Allen said.

Over the past decade Allen’s research efforts focused on finding the real costs and returns, environmental impact, and water used by different crop and livestock systems. A research and demonstration project initiated by Allen near New Deal provided the battleground to get this new offensive off the ground.

Her 10-year research showed about 25 percent less irrigation water and about 40 percent less nitrogen fertilizer were required for a diversified cotton/livestock system over cotton alone. Profitability was similar between the two systems. More recently, Allen has been joined in this new, expanded project by a group of researchers from Texas Tech and several other institutions and agencies in the producer-driven Texas Alliance for Water Conservation.

Their study and demonstration area covers more than 4,000 acres on 26 farms between Plainview and Floydada and assesses a diverse set of crops and livestock.

“We’re trying to find what is and isn’t working on the High Plains,” Allen said. “It’s a study of how people are changing in a shifting economy and resource opportunity.”

The replicated long-term integrated systems research at New Deal and the on-farm producer demonstration in Hale and Floyd Counties provided the resources and programs required to capture the opportunity of the new grant and positioned Texas Tech to become a designated long-term agroecosystem site in the United States, she said.