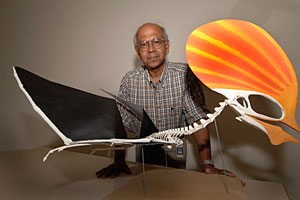 Texas Tech research Sankar Chatterjee says Tapejara could sail across the surface of the ocean by using its unusual cranial rudder and wings. Photo by Artie Limmer.

At first glance, the 115-million-year-old pterosaur looks like a Cretaceous design disaster. With a tail rudder on its head and a spindly, bat-like body, Tapejara wellnhoferi may appear fit for nothing but extinction.

However, researchers at Texas Tech University, the University of Kansas and University of Florida have found that the animal’s strange body actually made it a masterpiece of nature’s drawing boards. Not only could it walk and fly, but also it could sail across the sea.

Tapejara, a native coastal dweller of what is now Brazil, was an excellent flyer that also had an innate nautical knowledge of sailing, said Sankar Chatterjee, Horn Professor of Geosciences and curator of paleontology at the Museum of Texas Tech University.

Much like a Transformer, it could manipulate its body to match the same configuration as the world’s fastest modern windsurfers and sail across the surface of the ocean in search of prey. Then, it could take off quickly if the toothy underwater predators of its time got too close for comfort.

“The free ride from the wind would allow these animals to cover a large territory in search of food,” Chatterjee said. “Apparently, these pterosaurs knew the secrets of sailing that many novice sailors do not.”

Chatterjee and his research team determined Tapejara’s sailing ability by studying the aero-hydrodynamics of pterosaur wings through physics and computer simulation. He will present his findings Oct. 21 at the Geological Society of America’s annual meeting in Portland, Ore.

The basic design of Tapejara is a cross between two types of sailing vessels, Chatterjee said. The “hull” of the pterosaur is formed by dipping the breast bone into the water. The two hind legs directed backward functioned like lateral hulls. This design allowed the animal to skate on top of the water on triple surfboards just like the Wiebel – the world’s fastest trimaran windsurfer. This hull design minimizes contact with water, offers stability and enhances speed.

Rather than depend on a tailwind for propulsion, which doesn’t maximize speed, the animal probably opted to use a two-mast-and-jib design.

The long, narrow wings of Tapejara and the tall cranial rudder mimicked those of a two-masted schooner with a jib, he said. The animal probably lifted its wings up vertically to act like sails during surface swimming. Rod-like structures called actinofibrils served as sail battens, giving stiffness to the wing skin so it wouldn’t tear from the breeze. The cranial rudder functioned as a sailboat’s jib and helped with direction control.

“In downwind sailing, the wings act like parachutes, and the air is decelerated,” Chatterjee said. “Most likely, Tapejara would orient the wings in a fore-and-aft position like that of a sailing boat to exploit upwind sailing. The tilted cranial sail would create a slot effect like a sailboat, which produces a greater lift by improving airflow over the main sails. With the wind coming from ahead and to the side at about a 45-degree angle to the body, Tapejara could achieve speeds exceeding the wind speed. The fastest way to sail is with the wind coming from the side.” 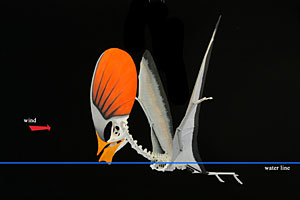 According to Chatterjee, the pterosaur would skate across the water by using the breast bone and two hind legs as hulls. Click to Enlarge.

Pterosaurs were highly successful flying reptiles that lived 228 to 65 million years ago from the late Triassic Period to the end of the Cretaceous Period. They dominated the sky, swooping over the heads of other dinosaurs. Their sizes ranged from a sparrow to a Cessna plane with a wingspan of 35 feet, he said.

This isn’t the first time Chatterjee and Lind have studied the animal. Last October, they announced they are developing a 30-inch robotic spy plane called pterodrone and modeled after Tapejara.

The drone, featuring the same strange design of a rudder at the nose of the craft instead of the tail, can gather data from sights, sounds and smells in urban combat zones and transmit information back to a command center.

Also, this is the second animal Chatterjee has studied that beat mankind to the punch with a design. In 2006, his research found that a 125-million-year-old feathered dinosaur from China named Microraptor gui glided through the air with winglets on its feet that worked just like the wings of a bi-plane.