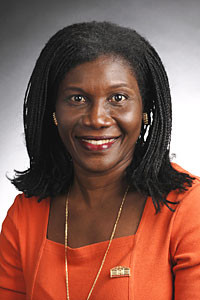 Texas Tech University’s chapter of the National Collegiate Hispanic Honor Society, Sigma Delta Pi, has been named an Honor Chapter for its outstanding activities in 2008-09.

The faculty adviser for the organization, Comfort Pratt, assistant professor in the College of Education, areas of secondary education and bilingual education, has been awarded the prestigious Minaya Álvar Fáñez Award, granted yearly to the country's most outstanding chapter adviser. This is the second consecutive year Pratt has received the honor, and the third time since the award was established in 2005.

Each May, all 564 chapters of Sigma Delta Pi are asked to submit an annual report detailing their numerous activities and projects from the academic year. Based on these reports, the national executive committee chooses approximately 10 Honor Chapters. The recognition centers on the caliber of chapter projects that reflect the Sigma Delta Pi mission of honoring excellence in the study of the Spanish language, contributing to cultural understanding and upholding the goals of the society.

“Dr. Pratt was instrumental in earning this national honor that was awarded to only nine chapters in 2009,” said Charles Ruch, interim dean of the College of Education. “Her impressive involvement with Texas Tech’s chapter distinguished her among the hundreds of other chapter advisers considered for the 2009 Minaya Álvar Fáñez Award.”

With its national office at The Citadel in Charleston, S.C., Sigma Delta Pi is a member of the Association of College Honor Societies, the nation’s only certifying agency for college and university honor societies.