New cotton technology developed by the university’s International Center for Excellence in Agricultural Genomics and Biotechnology will have positive impact on fiber properties. 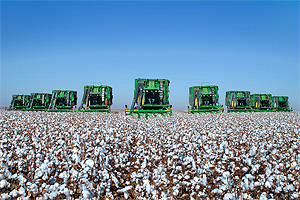 The center at Texas Tech was developed from a grant announced by Gov. Rick Perry from the $200 million Emerging Technology Fund.

Texas Tech University System Office of Technology Commercialization (OTC) and Bayer CropScience have signed an exclusive licensing agreement to utilize a new cotton technology from the university’s International Center for Excellence in Agricultural Genomics and Biotechnology.

When fully developed and introgressed into commercial cotton seed lines, the technology is expected to have a significant positive impact on fiber properties. Further details of the agreement were not disclosed.

“The technology has shown a lot of promise to improve fiber properties significantly during the experimental stage,” said Thea Wilkins, Bayer CropScience Regents Professor and director of the center. “We’re excited about partnering with Bayer CropScience to bring this technology to the marketplace.”

Bayer and the Texas Tech University Board of Regents created the $500,000 Bayer CropScience Endowed Professorship in 2005 to expand genetic-enhancement research for major crops with an emphasis on cotton.

“We have long enjoyed a close relationship with Texas Tech, and this new technology represents an important contribution to our efforts to deliver innovations in cotton.”

The university hired Wilkins in 2006 to anchor the International Center for Excellence in Agricultural Genomics in the Department of Plant and Soil Science.

The institute was developed using $1.9 million from the first grant announced by Gov. Rick Perry from the $200 million Emerging Technology Fund (ETF).

The ETF was created by the Texas Legislature in 2005 at the governor’s request to expedite the development and commercialization of new technologies and to recruit research talent to the state, and was reauthorized in 2007 and again this session with $203.5 million for the 2010-2011 biennium. To date, the ETF has allocated more than $99 million in funds to 78 early-stage companies.

“We created the Emerging Technology Fund to attract the best scientists and researchers to Texas, realizing that they were the key to creating technological innovations that will drive the state’s economy,” Perry said. “The International Center for Excellence in Agricultural Genomics and Biotechnology is an outstanding success story for the fund. Clearly the center is driving the development of new technologies and approaches that will fuel the future success of Texas agriculture.”

The Department of Plant and Soil Sciences is located in the College of Agricultural Sciences and Natural Resources. Faculty teach and conduct research in areas including biotechnology; crop, soil and turf science, horticulture, pest management and crop production.

The Office of Research Commercialization is an office of the Texas Tech University System.

The objective of the ORC is to form strategic alliances to bring new products, ideas and concepts to the marketplace utilizing professional research, legal and commercialization services and unparalleled integrity.

The ORC serves the entire West Texas region. If you are an inventor, investor, or just interested in learning more about technology commercialization, visit our web site for more information or call (806) 742-4105.