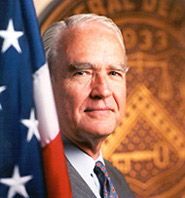 Donald E. Powell, who served as the former federal coordinator of Gulf Coast rebuilding and chairman of the Federal Deposit Insurance Corp., will speak at the ceremony.

In March 2008, Powell became a Class I director of Stone Energy Corporation, an independent oil and gas sector out of Lafayette, La. Powell was named by President George W. Bush as the federal coordinator of Gulf Coast Rebuilding on Nov. 1, 2005. He was tasked with developing a long-term rebuilding plan for the region in the aftermath of Hurricanes Katrina, Rita and Wilma, coordinating the federal efforts and helping state and local officials reach consensus on their vision for the region.

Prior to his appointment, Powell served from August 2001 until November 2005 as the 18th chairman of the FDIC.

Outstanding students will carry banners representing their respective colleges. Administrators selected the banner bearers based on all-around achievement. The Banner Bearers are:

Also recognized during commencement exercises are bachelor’s degree candidates with the highest grade-point-averages in their respective colleges.