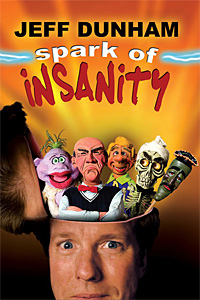 Jeff Dunham began ventriloquism at age eight. He made his debut on The Tonight Show with Johnny Carson in 1990.

To fill 8,600 seats at the United Spirit Arena, Jaime Resendiz may need a little help from his friends. Maybe you’ve met them – Bubba J, Achmed, Peanut, Walter and Jose’ Jalapeño. Oh, and Jeff. You know Jeff – Jeff Dunham, comedian and ventriloquist, whose Spark of Insanity tour is coming to Lubbock on Sept. 3.

Resendiz is president of the Tech Marketing Association (TMA), the student marketing organization in Texas Tech University's Rawls College of Business. Promoting Dunham’s appearance in Lubbock became the responsibility of the group, with scholarship money on the line tied to the success of the event.

“The more tickets that are sold, the higher the amount of scholarship money,” Resendiz said.

The scholarship money is part of the overall proposal package submitted by the promoter for Dunham’s Lubbock performance. The money will be allocated from concert ticket sales, courtesy of the promoter and Jeff Dunham, and will come out of the show’s settlement.

Each proposal submitted includes a proposed budget for marketing. Resendiz and his team had to run the plan – with radio, print, TV and other proposals itemized – past Dunham’s rep and then started the implementation phase. Ads hit television, radio and print in the spring, all with TMA’s logo or name mentioned.

“The promoter, Barbara Hubbard, is all about working with the students for learning opportunities and a foot in the door,” said Cindy Harper, associate director at the United Spirit Arena. “She is an amazing person, known as ‘Mother Hubbard’ for all of her great mentoring and college scholarship program, and is a true legend in the concert industry – 82 and still promoting, but now putting in offers to agents who were actually students she formerly mentored.”

Harper said Hubbard asked her about the possibility of student involvement.

Jeffrey Harper, Cindy’s husband and an instructor in the Rawls College Marketing area, suggested to Cindy that TMA might be the perfect match for this project. Cindy, a Texas Tech marketing graduate and former member of TMA, approached the group about their possible interest, and they jumped at the unique opportunity.

Resendiz and his team explored all types of marketing on their way to their final proposal.

“We did a lot of traditional print, like the Daily Toreador, the Avalanche-Journal, Plainview and Amarillo, and some local radio and television. We saved quite a bit of the budget for the August campaign.

“We chose some non-traditional things as well. Before school was out in May we designed and gave away some T-shirts just to raise awareness on campus. We also placed some Facebook ads. We put less than $100 in it, and we got really good exposure,” Resendiz said.

This Isn’t Your Daddy’s MBA