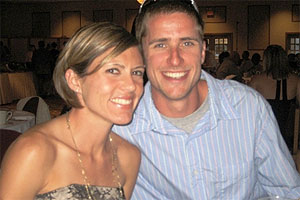 Alumna Leigh Daniel met her fiance Nick at Olympic Training Camp. They have been together for five years.

Daniel, a two-time NCAA national champion, seven-time All-American and seven-time Big 12 Champion, is now competing alongside her fiance for a Rockefeller Plaza wedding, courtesy of the TODAY Show.

The lovebirds will compete against three other couples in a series of challenges during the 10th Annual TODAY Throws a Wedding. Viewers will vote for the winning couple and a July 15 wedding will air live on the TODAY Show.