Two-day conference June 12-13, will focus on issues facing the wind turbine industry and the future of wind turbine farms in the United States. 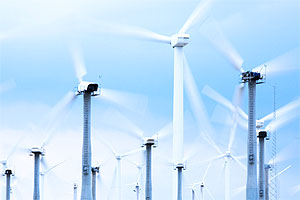 According to the American Wind Energy Association, two-thirds of the nation’s wind energy growth will occur in Texas.

The influences of wind power development on wildlife in Texas, along with the legal implications of locating wind farms specifically here in West Texas, highlight a two-day conference at Texas Tech University on the future of wind turbine farms.

"Blowin' in the Wind:The Future of Wind Turbine Farms," which will be held June 12-13 in the Lanier Auditorium of Texas Tech’s School of Law, is hosted by the university’s Department of Landscape Architecture, Department of Natural Resources Management and the School of Law.

Participants will examine a widely disparate range of issues facing the wind turbine industry in anticipation of what most experts expect to be its explosive growth over the next decade. Texas, in particular, has emerged as a significant potential site for the expansion of its already extensive wind power capacity.

In addition to examining the complex legal issues facing the industry, speakers also will address environmental impacts pertaining to animals, water and sound, and will consider the industry’s public administration and management implications.

Case van Dam, a professor of mechanical and aeronautical engineering at the University of California, Davis and the director of the California Wind Energy Collaborative, will deliver the conference’s keynote presentation, "Site Engineering for Wind Projects: A Californian Perspective," at a luncheon on June 12.

The State Energy Conservation Office has reported that Texas is currently the U.S.’ top wind producer and is the first state to achieve the one gigawatt milestone generated by its wind installations in a single year. Furthermore, in addition to being the site of three of the five largest wind farms in the nation, officials at the American Wind Energy Association predict that two-thirds of the nation’s wind energy growth will occur in Texas.

Indeed, the state already holds the record for the world's largest wind farm, Horse Hollow Wind Energy Center, which spreads across approximately 47,000 acres in Taylor and Nolan counties near Abilene. Aditionally, two other sites within two hundred miles of Lubbock figure prominently in the effort to harvest the region’s strong prevailing wind.

Sweetwater, for example, has perhaps the greatest concentration of wind farm turbine projects in the world and pending wind farms financed by T. Boone Pickens in nearby Amarillo are expected to dwarf the state’s current capacity.