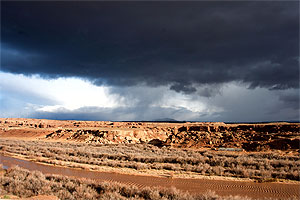 Researchers predict increased heavy downpours will lead to more flooding, waterborne diseases, negative effects on agriculture, and disruptions to energy, water and transportation systems during the next decade.

Climate change is visible and occurring throughout the U.S., but the choices we make now will determine the severity of its impacts in the future, according to a Texas Tech University climate scientist who served as a lead author on a report released today by the White House.

Katharine Hayhoe, a research associate professor in the Department of Geosciences, was one of 31 scientists from 13 U.S. government science agencies, major universities and research institutes that produced the study. In 2007, she was invited to serve as the lead author for the Great Plains chapter of the report, which includes Texas.

“During the next decade or two, we are likely to see an increase of 2 to 3 degrees Fahrenheit across the United States,” Hayhoe said. “How much temperatures rise after that depends primarily on our emissions of heat-trapping gases during the next few decades. Under lower emissions, temperatures could increase 4 to 7.5 degrees. With higher emissions, we can expect 7 to 11 degrees, with the greatest increases in summer.”

Using projections such as these, authors crafted what they call the most comprehensive, plain-language report to date on national climate change. Global Climate Change Impacts in the United States provides the most current information on how climate change is likely to impact key economic sectors and regions of the country. The report spans both the Bush and Obama Administrations.

The study found that Americans already are being affected by climate change through extreme weather, drought and wildfire, and details how the nation’s transportation, agriculture, health, water and energy sectors will be affected in the future. The study also found that the current trend in the emission of greenhouse gas pollution is significantly above the worst-case scenario examined in this report.

The Worth of Water

Hayhoe said heat waves, drought and heavy rainfall events are all expected to become more frequent for much of the nation, including in the Great Plains. Warmer temperatures increase evaporation. Combined with increased risk of drought, this raises concerns about the region’s water supply, already overtaxed in many parts of the Great Plains.

“Water is gold – here in Texas and across the Great Plains,” she said. “Much of it comes from the Ogallala Aquifer, which extends from Nebraska all the way down to West Texas. But on the South Plains, we’re already taking the water out faster than it can replenish, and aquifer levels across the region have dropped by more than 150 feet since irrigation began in the 1950s. Farming and ranching are already under pressure from expanding human development and limited water supply. Climate change will exacerbate these and other existing stresses on our natural environment and our society.”

Rising temperatures likely will further stress farms and ranches, shifting the areas where certain crops are grown, and allowing pests currently confined to the southern parts of the region to expand northward. Rising temperatures also will add to the pressure on the regions grasslands and playa lakes – unique habitats the Great Plains region offers to migrating and local birds as well as other wildlife.

The report emphasizes that the choices we make now will determine the severity of climate change impacts in the future. Earlier reductions in emissions will have a greater effect in reducing climate change than comparable reductions made later.

Main findings for the United States include:

The U.S. Global Change Research Program (USGCRP) supports research on the interactions of natural and human-induced changes in the global environment and their implications for society.

A product of the interagency USGCRP and led by National Oceanic and Atmospheric Administration, the definitive 190-page report is intended to better inform members of the public and policymakers.

Visit the U.S. Global Change Research Program Web site for complete downloadable files of the report as well as additional content on climate and global change.