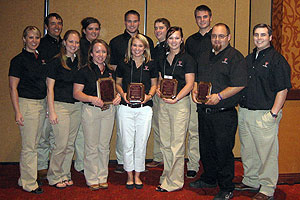 The Red Raiders dominated 23 other teams that represented the top meat science programs at universities from across the United States. Penn State’s team finished second in the competition. Texas Tech adds to national titles won at the competition in 2003, 2005 and 2007.

Three Texas Tech students also were honored at the opening session by the American Meat Science Association (AMSA) for their outstanding academic achievement and leadership in the meat science industry. Shanna Ward and Paden Daniels both received one of ten AMSA travel awards to waive their cost of attending the conference. Ben Estes received one of ten AMSA academic achievement awards.

RMC is an annual conference sponsored by AMSA which brings together meat scientists and students from academia, industry and government. Texas Tech will host the 63rd RMC June 19-23, 2010 in Lubbock.