The university has secured the intellectual property protection to produce the lauded FibertectTM decontamination wipe. 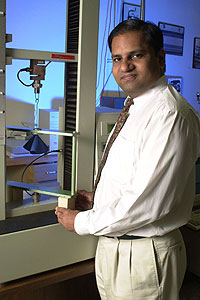 The FibertectTM wipe was invented by Seshadri Ramkumar, an associate professor of environmental toxicology at TIEHH at Texas Tech.

The process used to create nonwoven toxic chemical decontamination wipes, such as Texas Tech University’s FibertectTM, recently received a patent from the United States Patent and Trademark Office. Receiving the patent means the university has secured the intellectual property protection for the decontamination wipe’s technology, said David Miller, vice chancellor of Texas Tech University System’s Office of Technology Commercialization. “This is an important milestone in the commercial development of the product and will aid our partner, Hobbs Bonded Fibers, in its marketing and sales efforts,” Miller said. “This is one example among the many novel technologies developed from Texas Tech’s research initiatives.” Currently, the FibertectTM wipe is under production by Hobbs Bonded Fibers of Waco and was invented by Seshadri Ramkumar, an associate professor of environmental toxicology at The Institute of Environmental and Human Health (TIEHH). “The process for which the patent has been issued focuses on a multilayered wipe with a unique fabric structure, which can wipe liquid and vapor toxins,” Ramkumar said. “Also, it lends itself to the use of cotton and other fibers, depending on the need. The wipe can be used on human skin and military equipment.” Ramkumar was issued patent No. 7,516,525, titled Process for Making Chemical Protective Wipes and Such Wipes. “This technology has been used successfully to develop products such as our nonwoven decontamination wipe, FibertectTM,” said Ron Kendall, director of TIEHH. “The need for decontamination wipes, such as the kind we’ve created here at TIEHH, were a top priority for the Department of Defense. Years ago, we began the research, developed a product and met a top national security issue.” In December, Lawrence Livermore National Laboratory performed an evaluation of several decontamination products including FibertectTM. Their results were published in the American Chemical Society’s peer-reviewed journal, Industrial & Engineering Chemistry Research. The wipe that researchers tested features an activated carbon core sandwiched between an absorbent polyester layer on one side and absorbent cellulose on the other. After testing with mustard gas and other toxic chemicals, the results showed that the Texas Tech-created dry fabric out-performed 30 different decontamination products, including materials currently used in military decontamination kits. The laboratory recommended FibertectTM to be part of a prototype low-cost personal decontamination system.

The institute’s goal is to position Texas Tech as an internationally recognized force in the integration of environmental impact assessment of toxic chemicals with human health consequences, framed in the context of science-based risk assessment to support sound environmental policy and law.