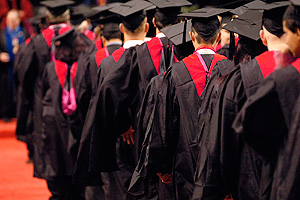 Ambassador Karen P. Hughes, former counselor to President George W. Bush and under secretary of state with the rank of ambassador, will speak Friday at the 4 p.m. undergraduate ceremony and at the 7 p.m. Graduate School ceremony.

Scott Pelley, a correspondent for 60 Minutes, will speak at two Saturday commencement ceremonies.

More than 3,100 students will receive diplomas during the five ceremonies scheduled at the United Spirit Arena.

Commencement exercises for students in the College of Agricultural Sciences and Natural Resources, Jerry S. Rawls College of Business and College of Mass Communications will take place at 4 p.m. May 8. The Graduate School Ceremony follows at 7 p.m.

Students in the College of Arts and Sciences as well as students receiving university studies degrees and Honors College students who majored in natural history, humanities and honors arts and letters will celebrate commencement at 9 a.m. Saturday (May 9).

The Edward E. Whitacre College of Engineering and Colleges of Architecture, Education, Human Sciences and Visual and Performing Arts will host exercises beginning at 1:30 p.m. Saturday.

Karen Hughes served as counselor to President George W. Bush from 2001-2002 and as under secretary of state for public diplomacy and public affairs from 2005-2007. Prior to that she served as director of communications in the Texas Governor's Office and directed communications during then–Gov. Bush's successful campaign for Texas governor in 1994 and his campaign for re-election in 1998.

Karl Rove served as senior advisor to President George W. Bush from 2000–2007 and deputy chief of staff from 2004–2007. At the White House he oversaw the Offices of Strategic Initiatives, Political Affairs, Public Liaison, and Intergovernmental Affairs and was Deputy Chief of Staff for Policy, coordinating the White House policymaking process.

Before he became known as the architect of Bush’s 2000 and 2004 campaigns, he was president of Karl Rove + Company, an Austin-based public affairs firm that worked for Republican candidates, non-partisan causes and non-profit groups. His clients included more than 75 Republican U.S. Senate, congressional and gubernatorial candidates in 24 states, as well as the Moderate Party of Sweden.

As a political reporter, he has covered numerous presidential campaigns and conducted six presidential interviews. Among his most memorable assignments was reporting from the World Trade Center as Tower One collapsed on September 11, 2001.

Wentworth is serving his sixth term in the Texas Senate, where he was president pro tem in 2004-2005 and where he was inaugurated as Governor of Texas for a Day on Nov. 20, 2004.

More information available at the commencement Web site. Ceremonies will be streamed live.