The $4 million Peggy and Bill Dean Expansion to Merket Alumni Center will nearly double the current size of the facility. 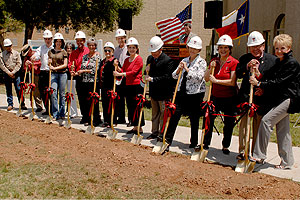 The expansion project, scheduled to be complete in 2010, will nearly double the size of Merket Alumni Center by adding 10,694 square feet. Click to Enlarge.

Scheduled to be completed in spring 2010, the expansion project will nearly double the present Merket Alumni Center by adding 10,694 square feet. A new, second entrance into the facility will open into the Peggy and Bill Dean Grand Reception Hall. Three new banquet/meeting rooms will be constructed on the west end of the building.

“Despite the current economic conditions, many individuals, businesses and foundations have already pledged their support to make this much-needed expansion possible,” she said. “Confident that we are on track to raise the rest of our goal, our national board has elected to begin construction now.”

McKenzie and her husband Mickey of Sulphur Springs, have provided the largest single gift. The new ballroom, which seats up to 600, will be named in their honor.

Other features in the addition include a new serving kitchen with storage; a new circulation, staging and planning office; a bride’s room and new restrooms. The existing kitchen will be remodeled into an office suite for the association’s marketing department. Two memorial groves will be planted on the grounds, and a second courtyard will be built to the east, featuring an outdoor gazebo.

Joe D. McKay of JDMA, Inc. is the architect for the project, Lee Lewis Construction, Inc. has been named general contractor, and Ogallala Construction Management will serve as project manager.