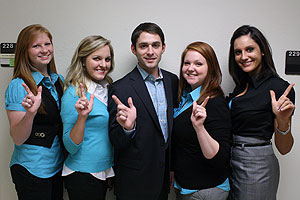 For winning the district, team members will compete nationally against teams from 14 other districts this June in Washington, D.C.

The university’s team of 18 students worked on an alcohol consumption awareness campaign aimed at college-age students for the Century Council, a national non-profit organization that fights to eliminate drunk driving and underage drinking.

Texas Tech’s campaign revolved around “Really? You call the shots” as a tagline.

The team competed against 15 other universities in the district, which covers Texas, Oklahoma, Arkansas and Northwest Louisiana. In competition, five presenters gave a 20-minute presentation on the campaign to four judges.

Shannon Bichard, an associate professor of advertising and faculty advisor for the ad federation, said this was the first time since the late-1980s that Texas Tech has won the district competition. The university won nationals in 1984.

“The whole campaign centers around ‘you call the shots,’” Bichard said. “The ‘really’ is used kind of sarcastically in the way students use the word. It resonates with them without being authoritative. They agreed they thought this would really make the target audience think about ordering another drink if someone at the bar turned to them and asked ‘really’ in a sarcastic way.”

Stephanie Foster, junior advertising major from College Station, served as the campaign’s account executive. She said it was difficult to create a campaign that would cut through the noise and catch the attention of a target group used to tuning out obvious advertising jargon.

“I can’t tell you how many concepts we’ve gone through,” Foster said. “We’ve been working on this since September. Getting college students not to drink is hard. They’re just going to do it anyway. We thought that we’ve heard ‘don’t drink and drive’ all our lives, but no one’s ever said ‘just be responsible when you drink.’ No one’s ever really said ‘keep your number of drinks in mind. Don’t be that guy.’ So, through tons of concepts we found something the target message could relate to. It wasn’t just eye-catching or funny.”

The Department of Advertising is part of the College of Mass Communications at Texas Tech.

The College offers undergraduate degrees in various communications-related disciplines including: