Beginning this fall, Texas Tech will offer courses in winemaking, viticulture and wine tourism as well as a new undergraduate degree opportunity in viticulture and enology, a first for Texas universities. 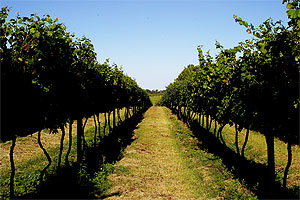 As the wine industry booms in Texas and across much of the United States, Texas Tech University has added a degree specialization and slate of new courses teaching everything from grape growing to wine production and winery management.

The university is now the first in Texas and one of a handful in the nation to offer an undergraduate program in viticulture and enology, or the study of grapes and wine.

This influx of graduates should help fill the needs of wine production and retailing industries that have quickly spread beyond the borders of traditionally wine-rich states such as California and Washington.

Texas alone now has more than 162 wineries fermenting vintages, making it the fifth-largest producer in the U.S., and shows no signs of slowing down – Texans are sipping more wine than ever before, according to a recent study by Texas Tech’s Wine Marketing Research Institute.

“The wine industry has expanded rapidly in the past five years or so, and not just in Texas,” said Ed Hellman, a Texas Tech professor of viticulture with a joint appointment at Texas Agrilife Extension. “You look at states like Oklahoma, New Mexico – even Nebraska and Kansas – and there are burgeoning industries there. This has created a need for graduates, which is why we can offer this new degree specialization. Even eight years ago, we couldn’t have been teaching these subjects; we didn’t have the faculty to teach them.”

Beginning this fall, students pursuing a horticultural and turfgrass sciences degree will have the option to specialize in viticulture and enology. Texas Tech also will introduce courses on winemaking, viticulture and wine tourism. By 2010, offerings will expand to include winery business planning, wine marketing and vineyard management.

The courses draw on a wide range of programs at Texas Tech, including those in the:

Texas Tech University offers unique education and research opportunities to those interested in the wine and grape industry through the: