Singers will perform an adaptation of Donizetti’s “The Elixir of Love” during sixth annual performance. 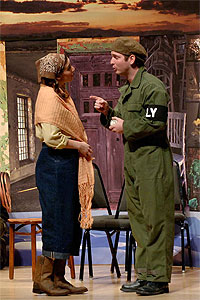 Photo of the the production "Trinty" from the 2007 Santa Fe Opera Apprentice Spring Tour program.

The free community concert is scheduled for 7 p.m. April 13 at Hemmle Recital Hall.

“The Santa Fe Opera Apprentice Singers have a devoted following in Lubbock,” said Jo Moore, administrator for the series. “We are delighted to once again be able to host these outstanding performers.”

The concert will feature soprano Ashley Logan, tenor Jon-Michael Ball and baritone Michael Nyby. The singers will perform an adaptation of Donizetti’s “The Elixir of Love.” Kirk Pavitt, music director and pianist, will accompany the singers.

Performances will also be held on April 14 and 15 for Lubbock-Cooper Independent School District elementary, middle school and high school students. The opera tour is a project of The Santa Fe Opera’s Education and Community Programs Department.

The Santa Fe Opera pursues high artistic standards casting some of the world's most talented young singers and performing a wide-ranging repertory.

The opera is committed to developing future artists and audiences through the apprentice program and community outreach.