After 85 years, the original President's Home on campus still stands as a testament to the indelible foundations of Texas Tech University.

You’ve seen it – that building on the southeast corner of campus. You’ve probably even been there for a meeting, reception or maybe a wedding. But how well do you really know the Merket Alumni Center?

It began as a home of mat brick and red mission tile – a beautiful Spanish Renaissance structure built specifically for comfort, convenience and entertaining guests. It was home to the first presidents of the university and was one of a handful of buildings ready for use when Texas Technological College opened its doors in 1925.

Home of the Founding Fathers

The home has a bit of a macabre side as well. On April 13, 1932, President Horn died of a heart attack after taking his morning bath. Some say he died in the second floor hallway, while walking from the bathroom to his bedroom. Others say he died on the sleeping porch next to his bedroom. Those rooms were later turned into office spaces by the Texas Tech Alumni Association, which is currently based in the residence. Employees working after hours are said to have seen and smelled his pipe smoke late at night and mysterious sounds of party chatter and jingling keys down the hallway also have been reported.

The last president to occupy the residence was Edward N. Jones, who stepped down in 1959. His successor, Robert Cabiness Goodwin, chose not to live in the President’s Mansion but rather stay in his current residence in Lubbock, leaving the home empty. 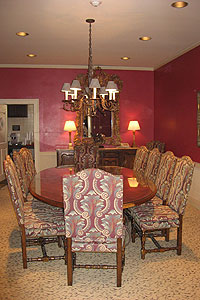 The formal dining room, once used for dinner parties and evening meals, is now used for informal gatherings and meetings.

In 1960, the mansion was brought back to life when a portion of the School of Home Economics moved in, making the facility the new Home Management House. With a working kitchen and entertaining space, the home offered students a place to live while learning practical domestic skills. Students were responsible for all aspects of home management including budgeting, cooking, cleaning, entertaining and even caring for a baby – usually the child of a student. The house also was used as a practical lab for classes in home furnishings and design. This went on for nearly 10 years until the program was moved off campus.

In 1969, the Ex-Students Association, later called the Texas Tech Alumni Association, made the building its headquarters. Bedrooms were turned into office spaces and living rooms into small meeting rooms. The garage was remodeled into a print shop and the kitchen became a break room.

For years the home was suitable for the small staff, but by 1990 they had outgrown the facility. Bill Dean, who became executive director in 1978, invited a team of alumni association directors to visit Lubbock and evaluate the organization and facility. According to Dean, one of the strongest comments was that the association had one of "the worst alumni centers they had ever seen."

The President’s Home was not easily identifiable as the home of the Alumni Association or suitable as a gathering place for large events, not to mention the building was nearly 70 years old and overdue for some remodeling.

In 1997, the President’s Home was expanded into the Merket Alumni Center. The building was named after Gerald and Louise Merket, ex-students from Tyler, who gave a large contribution. The once-4,082 sq. ft. home was now a 12,082 sq. ft. building, complete with a banquet hall, a lounge and reception area, more office spaces, a gift shop and a remodeled courtyard displaying a beautiful fountain.

Although the exterior of the home was modified through the expansion process, the interior was to remain in its original form. The association hired H. Deane Pierce, a 1950 Texas Tech architecture graduate, as the interior’s architect. Pierce, a traditionalist with an aesthetic for celebrating the culture of place, was the mastermind behind restoring the east entrance, including the fireplace, windows and floor, to its original 1920s form. Pierce based his work off of his own fond memories of the home. 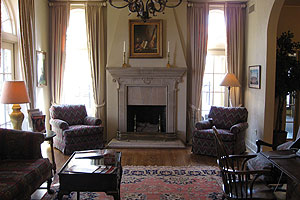 The fireplace in the President's Home sitting room was restored to its original 1920s design by architect H. Deane Pierce.

"I was first in the old part of the building when I was about six years old," said Pierce. "My mother was very good friends with the wife of President Knapp. I remember walking into the living room with the fireplace and seeing a very strange object there. It was a spinning wheel and Mrs. Knapp showed me how it worked.

"When I was approached to do the interior work on the building, I referred to a photograph of that living room. The fireplace had been redone by then; the stone mantle had been replaced by gypsum wallboard. I hoped, when we took out the wallboard, that the mantle would still be intact, but it wasn’t. I used that photograph to recreate the original mantle as best I could."

After Merket was built, the Alumni Association continued to grow. Today, the facility is once again in need of expansion.

"We need a new marketing facility," Dean said. "The current floor plan is not conducive to the needs of the association. You have to walk through the kitchen to get to the marketing offices."

With an economic downturn looming for the nation, Dean knew there was no better time to act.

"The longer we waited the more expensive the project would become, so I said 'let’s put our heads together and raise some money.'"

To Dean’s surprise, the expansion proposals were tabled. However, a secret plan was revealed during the 2008 Homecoming Dinner on Oct. 10. The Alumni Association announced the Building on Traditions capital campaign, a $4 million project to double the size of the Merket Alumni Center. In the plans: a new grand reception hall to be named after Dean and his wife Peggy. The vision of the project and the initial gift came from Alumni Association President Rex Isom. 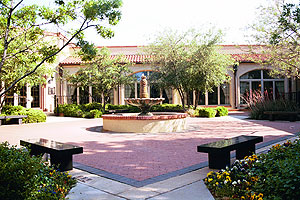 The expansion, which is set to break ground in March, will add 10,694 square feet to the existing facility. A new, second entrance will open into the grand reception hall, with fireplace and bar. Three additional banquet/meeting rooms will be added, doubling the banquet space. When combined, they create a grand ballroom seating up to 600. To serve the growing needs of the facility, the expansion will include a new serving kitchen with storage, a new circulation, staging and planning office, a bride’s room and new restrooms.

Already a popular venue for banquets and weddings, Dean hopes the new expansion will make Merket the first place people think of when they have an event.

"You can’t book anything on the weekends from March to October because so many people want to have weddings and receptions at Merket," Dean said.

Although the occupants have changed over the years, what once began as a place to entertain the Texas Tech community remains more or less the same, except on a much grander scale. Instead of hosting high teas for a small number of students and faculty, it’s weddings and receptions for hundreds.