Texas Tech ranks in the TOP500 Supercomputer rankings with the acquisition of the high performance computing cluster Grendel. 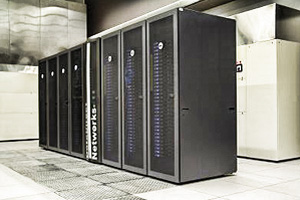 The ranking places Texas Tech second in Texas and third in the Big 12 behind the University of Texas and the University of Oklahoma. The TOP500 Supercomputer Sites group has been ranking the 500 fastest computer systems in the world since 1993. The list includes computer systems from national research laboratories, universities and the private sector.

“High performance computing is used world-wide in virtually every area of scientific research and discovery,” said President Guy Bailey. “This new cluster places us among the very best universities in the world in this area and will help us reach our goal to increase research and strive to attain Tier One university status in Texas.”

Texas Tech acquired the DELL high performance cluster known as Grendel late last year. It is housed in the newly constructed High Performance Computing Center (HPCC) in the Experimental Sciences Building.  Grendel consists of 1,680 processor cores and 100 terabytes of directly attached storage capable of an aggregate processing speed of 20 teraflops. In lay terms that is the equivalent of the power of 1,600 standard desktop computers working at one time on a problem. Grendel represents a four-fold increase in power over the university’s existing cluster, which remains available to researchers.

“We engaged our researchers to help us determine what we needed to meet the increasing demand for a higher density computing environment,” said Sam Segran, chief information officer for the university. “The new cluster will accelerate current research projects and help us recruit new researchers.” 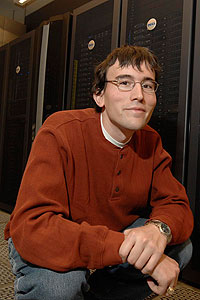 Grendel was able to help graduate research assistant Casey Richardson, by computing his complex algorithms in a short amount of time.

For one graduate student, Grendel was the difference in completing his research. Casey Richardson is a research assistant working on his master’s degree, funded by the National Institutes of Health. He created an algorithm to search for MicroRNAs, which are genes made from DNA but differ from other genes in that they do not encode proteins. The discovery of MicroRNAs in the 1990s opened the field of RNA interference, the subject of the 2006 Nobel Prize in Medicine and Physiology. By discovering new MicroRNAs and elucidating the mechanisms of how they turn off other genes, for example a cancer gene could be made to de-activate.

“I was stalled in my research with the old system, it just was not powerful enough to run the computations. I was able to run only about one percent of my work,” Richardson said. “With Grendel, I finished a project in a week that had been stalled for about three months.”

According to Phil Smith, senior director for the HPCC, the new supercomputing cluster will accelerate current Texas Tech research projects in high energy physics, molecular dynamics, computational chemistry, fluid flow modeling and other areas that collectively generate approximately $4 million in research funds each year. The new facility also provides room for on-site support staff and additional computing capacity as the need arises. The facility is a cooperative effort with the Office of the Chief Information Officer, the vice president of research and the Office of Facilities, Planning and Construction.

A component of the university’s Information Technology Division, the HPCC supports research and teaching by providing resources and expertise for supercomputing, grid computing and cyber-infrastructure.