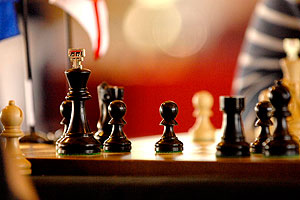 The 2009 SPICE Spring Invitational will feature six of the top chess players from around the world including one from Texas Tech.

Opening ceremonies for the event will take place at March 16 at the Southwest Collection/ Special Collections Library.

“It’s a great honor for SPICE and Texas Tech that the International Chess Federation is watching us and sending a representative to report on the tournament,” said Polgar, who described the tournament as one of the most prestigious of its kind to be held in the U.S. this year.

Sand comes to Lubbock to meet with Polgar and other members of SPICE as part of a research and fact finding mission to strengthen Norway’s bid to host the 2014 Chess Olympiad in Tromse, Norway.

International Master (IM) Gergely Antal, member of Texas Tech’s Knight Raiders, and 14-year-old Ray Robson, one of the youngest IM’s in the U.S., are among the participants in the tournament, both of whom will be competing to earn their Grandmaster (GM) status.

Other participants include IM Robert Hess from the U.S., GM Giorgi Kacheishvili from Georgia, GM Dashzegve Sharavdorj from Mongolia and GM Timur Gareev from Uzbekistan.

“It’s wonderful that Texas Tech and SPICE are able to attract players from all over the world to come play here,” said Paul Truong, communications director for SPICE. “Back in 2007 no one had heard of Lubbock in terms of chess, and now we have lots of super stars of chess saying ‘please invite us to come.’ It really says something about how far SPICE has come along in the past year and a half.”

The public is invited to attend the free event.