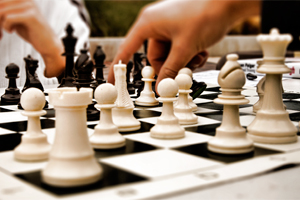 SPICE hopes to build on last year's success and increase the number of participants who will compete in the 2009 tournament.

The championship is a four-round Swiss system tournament and will be rated by the United States Chess Federation (USCF).

Paul Truong, director of marketing for SPICE, said the tournament is the flagship open chess tournament for the city of Lubbock.

“In its first year, the Lubbock Open drew 109 players,” Truong said. “We aim to consistently increase the number of participants each year. Our goal is to reach 500 players for this championship within the next five years and eventually reach the 1,000 player mark.”

On-site registration and check-in will take place from 9 -10:30 a.m. Registration is $10 before April 1, and $20 after. A valid USCF membership is required for registration and can be obtained at the USCF Web site or on the day of the tournament before 10 a.m.

What it Feels Like... To Recruit Chess Players in Dresden Germany