Texas Tech University Celebrates the International Year of the Organ with special performance. 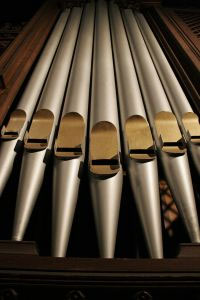 The School of Music will present the International Celebration of the Organ 2008-2009 with Thomas Hughes 8:00 p.m. Monday, March 23 in Hemmle Recital Hall.

The International Year of the Organ is a year-long celebration of the organ. The year will include various events in this country and abroad and will entertain, inform and engage new audiences for organ music, while giving seasoned listeners a fresh perspective on the organ’s expansive repertoire. Similar events also will be held abroad. Other events suggested for the 2008-09 program year include educational events, including the American Guild of Organist’s (AGO) Pedals, Pipes and Pizza, visits to organ building shops and concerts featuring the organ with other musical ensembles.

What people don’t know is that the organ has been a mainstay of international musicians since the 12th century. Originating some 2,000 years ago in ancient Egypt, the organ has been used in gladiatorial games, as gifts by kings and queens and, most importantly, as a tool to produce the world’s universal language: music.

Hughes will be joined by several other organists as well as flute and cantor. Don’t miss this evening of entertainment. There is no admission charge and a good time is a sure thing!

The School of Music at Texas Tech is part of the College of Visual and Performing Arts.