Brian D. Shannon will serve a two-year term on the Governor’s Committee on People with Disabilities. 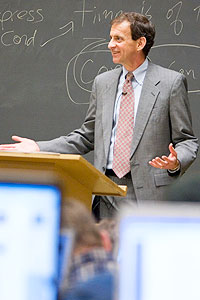 Brian D. Shannon is the Charles “Tex” Thornton professor of law at the Texas Tech University School of Law.

Gov. Rick Perry has appointed six members to the Governor’s Committee on People with Disabilities for terms to expire Feb. 1, 2011.

Reappointed to the committee is Brian D. Shannon, the Charles “Tex” Thornton professor of law at the Texas Tech University School of Law.

The committee works to ensure that Texans with disabilities have full and equal access to lives of independence, productivity and self determination.

Shannon is president of the Lubbock County Bar Association and an elected member of the American Law Institute. He is a member of the American Bar Association, Lubbock Regional Mental Health and Mental Retardation Center Board of Directors and Lubbock Dispute Resolution Center Advisory Board. He also is Texas Tech’s faculty athletics representative to the NCAA and Big 12 Conference. Shannon served in the U.S. Air Force, and received a bachelor’s degree from Angelo State University and a law degree from the University of Texas at Austin.

Other reappointments include Joe Bontke of Houston, Daphne Brookins of Fort Worth and David A. Fowler of Katy. New appointees include Alan Babin Jr. of Round Rock, who replaces Shane Whitehurst of Austin; and Bobby Z. “Robby” Holcomb Jr. of Mount Pleasant, who replaces Roland Guzman of San Antonio.