Doug Fine will show the Texas Tech community how to do its part to preserve the environment March 5 at the International Cultural Center. 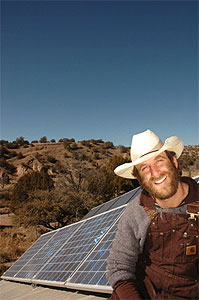 Doug Fine will pull into Lubbock on the evening of March 5, in his Ford F-150, powered by a lot of vegetable oil and a little ingenuity. The quirky journalist turned non-fictionist will explain how even the least environmentally savvy citizens can reduce their carbon footprints, without giving up the American lifestyle.

Though he makes a completely solar powered ranch in desolate New Mexico his home, Fine’s latest novel, “Farewell: My Subaru,” will bring him to Texas Tech University. He will sign copies of the documentary, an honest account of the challenges, failures and successes he has faced making the switch from oil-dependent to petroleum-free, at 6:30 p.m. at the International Cultural Center (ICC).

In his discussion, Fine will address mainstream Americans who would like to do their part to preserve the environment within their communities, but don’t know where to start.

Fine, a National Public Radio contributor who has appeared on CNN and NBC’s “The Tonight Show,” gives helpful tips to community members on how to incorporate environmentally friendly practices at the grassroots level, without sacrificing the comfort of modern conveniences.

Directly after Fine’s address, the ICC will present the first ever G.R.E.E.N. (Grassroots Efforts to Ecologize Neighborhoods) award to Debbie Zak for her innovated recycling efforts at North Ridge Elementary School.

“Our recycling efforts have been going on for the past ten years,” Zak said. “We not only encourage students to recycle their assignment papers, plastics and aluminum cans used at school, but once a week they bring items from home.”

Zak said that the school has reduced its waste by one-third, mostly because of students’ efforts. Due to the volume of items North Ridge Elementary collects, The City of Lubbock has made the school a satellite recycling station for the community.