Board of Regents Elects Officers, Swears In New Members 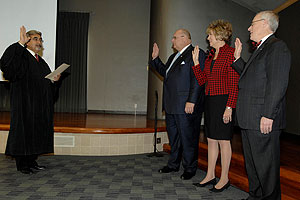 Anders was appointed to the board in 2005. He is the chairman and majority owner of Summit Alliance Companies, an independent investment advisory and financial services firm in Dallas. A native of Lubbock, Anders attended West Texas State University before attending Texas Tech. His term expires on Jan. 31, 2011.

Turner was appointed to the board in 2007. He is a partner at Andrews Kurth, L.L.P. specializing in public finance. Turner, who lives in Blanco, graduated from Texas Tech with a bachelor’s degree in 1968. His term expires on Jan. 31, 2013.

Also, three new regents took their oath of office. They are: John Huffaker of Amarillo, Mickey L. Long of Midland and Nancy Neal of Lubbock.

Huffaker is a partner at Sprouse Shrader Smith Law Firm. He replaces Windy Sitton of Lubbock. Long is president of Westex Well Service LP. He replaces Bob Stafford of Amarillo. Neal is a registered nurse, former school health nurse and past member of the Texas Higher Education Coordinating Board. She replaces Scott Dueser of Abilene.

The terms of the new regents will expire Jan. 31, 2015. The governor appoints nine people in staggered six-year terms to the board plus one student regent who serves a one-year term. Read More.