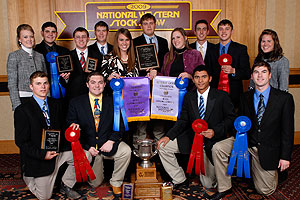 The team narrowly defeated the competition – winning by two points – to claim the Denver competition for the first time since 1986.

The students have been preparing for the competition since August. Contestants graded one rail of 15 fleeces, placed six classes and presented two sets of oral reasons.

The team is coached by graduate student L.J. Ashorn and Moriah Beyers, a coordinator in the Department of Animal and Food Sciences. Associate professor Sam Jackson supervises the program.

The team will represent Texas Tech at the San Antonio Stock Show in February and at the Houston Livestock Show and Rodeo in March.