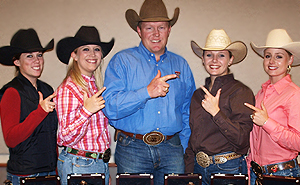 The Ranch Horse Team led by Kris Wilson (center) will compete again in the Spring. Find out more about the Ranch Horse Program at Texas Tech.

The open competition featured 10 high-profile teams from across the nation.

“It’s amazing that the Ranch Horse Program could be represented so well in this inaugural event,” said Kris Wilson, coach of the Ranch Horse Team and assistant professor in the university’s Department of Animal and Food Sciences. “This was truly an historical day for the program.”

Among the student winners were:

Meanwhile, Wilson himself took first place in the event’s All Around Open competition. Cara Wilson, an employee in Texas Tech’s Office of Admissions and wife of Kris Wilson, took top honors in the All-Around Novice Reserve category. Cara Wilson often assists in helping prepare for ranch horse team events and at times accompanies students to competitions.

The wins in Waco marked the end of the team’s fall season; it continues competition throughout the spring, culminating at the 2009 ASHA Collegiate National Championship on April 25 at the Texas Tech Equestrian Center.

Read more news from the College of Agricultural Sciences and Natural Resources.