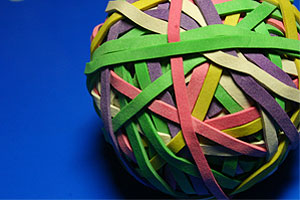 The new approach to polymer syntheses has the potential to produce rubber that is stronger and more durable than ever before.

In the not-so-distant future, plastics could be more durable and rubbers could be more … well … rubbery thanks to a novel new approach to polymer synthesis discovered by Texas Tech University organic chemists. In research slated for publication in the Journal of the American Chemical Society, the scientists demonstrated what principal investigator Michael Mayer refers to as an “elegant and simple” process for ultimately creating a slip-linked pulley system of molecules that could be used to create tougher and more elastic synthetic materials. “No one has ever reported making polymers in this way,” said Mayer, an assistant professor of organic chemistry in the Department of Chemistry and Biochemistry. “It is a fundamentally new, stripped-back approach to the synthesis of this class of polymeric materials.” Mayer’s findings provide a new way to form unusually complex polymers-compounds such as rubber formed from clusters of atoms that are chemically chained together. Current methods for creating polymer networks rely on chemical reactions to cross-link the large molecules.  However, when the resulting materials come under stress, Mayer said, the cross-links, which are often times the weakest links, can break resulting in failure of the material. Mayer and his team, led by senior graduate student Songsu Kang, tried a different approach, beginning with molecules in the form of two interlocked rings – much like the rings used by magicians in the so-called “magic ring” trick. Their resulting materials have rings that can literally slide along the polymer chains, providing anchor points for cross-linking that can move when the materials are mechanically strained. Mayer said this proof-of-concept research could someday be used to create pliable networks of polymers, and said his design fits with the theoretical models used by polymer physicists. “Their theoretical models show polymers as cross-inked by such rings,” he said. “Now we actually have a well-defined method to prepare materials that fit these descriptions.” View the full report

The Department of Chemistry and Biochemistry is housed in the College of Arts and Sciences.

The department offers six degree programs including a master's and doctorate in chemistry.