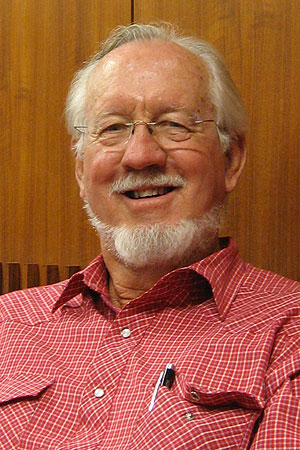 Alumnus Bob Garrett earned his master's degree in chemistry in 1957. He is the genius behind the Garrett Gas Train sulfide analysis device, which helps workers detect hydrogen sulfide gas in oil fields.

The outside of the Chemistry Building looked much the same to Bob Garrett.

But inside, everything had changed. The native of Abernathy and a 1957 graduate of Texas Tech couldn’t recognize his old office. All the classrooms are, well, much more modern.

Then, he noticed an old photo in the lobby.

“There was a picture of Dr. Bob Rekers and a very young-looking student in a lab,” he said. “On the back was written, ‘Dr. Rekers and a student.’ Now they know that ‘a student’ was me.”

The changes are all progress, he said, much like how the oil industry has changed completely since he earned his degree. Sure, it’s still about drilling a hole in the ground and getting oil or gas out of it. But better technology and newer procedures – something he’s played a role in during his career – have revolutionized the processes to make it safer and more efficient, he said.

Coming back to campus this fall for a short visit brought back fond memories of the beginning of the oil executive’s career.

"I only get to come back to Lubbock every now and again," he said. "It’s kind of a homing instinct because of Texas Tech, and some of my family lives here. A lot has happened to me and to the university since I left 51 years ago to work in Houston’s oil industry."

Born in Abernathy in 1933, his family moved two years later to central Texas to escape the Dust Bowl. His rural school system education left him lost when he went to Abilene Christian College in 1951.

"My high school chemistry had been nil and my math courses very skimpy," he said. "So, I had to do a lot of remedial work in college."

Garrett worked hard to catch up and get his bachelor’s degree in chemistry. He earned a teaching fellowship when he came to Texas Tech in 1955.

Before graduating in 1957 with a master’s degree in chemistry, Garrett met a former Texas Tech graduate who came on a recruiting junket for his oil company. The man would become a lifelong friend, mentor and co-worker.

Fred Brooks came to campus to recruit Garrett to the Humble Oil & Refining Co. for their fledgling but prestigious Production Research Division in Houston. The two worked together for five years, frequently with the outstanding scientists of that era– many Nobel Prize laureates, such as Peter Debye, Edward Teller, Philip Low and Van Neumann, before their paths diverged and the division became Exxon’s Production Research.

“When Fred Brooks and I joined Humble in the ’50s, most major oil company research organizations didn’t look to Texas Tech for scientific staffing,” he said. “They recruited from Rice, MIT, University of Oklahoma and LSU. By coming from Texas Tech, Fred and I apparently broke the mold in that regard. We’ve both fared very well competing in that elite group of scientists and engineers during a 30-year period.

“I think that Texas Tech taught me how to listen and learn and how to be practical. The education we got was just as good as it could be.”

While working at Exxon in the early 1970s, Garrett invented a device that would help save lives out in the oil patch – the Garrett Gas Train (GGT) – a sulfide analysis device he considers one of his greatest achievements.

Hydrogen sulfide gas is a problem on drilling rigs, he said. The poisonous vapors could quickly kill employees and cause drill pipe to become brittle and break. An easy test for it didn’t yet exist.

"I saw a serious need for a rig-site chemical test to clearly identify when an influx of sulfides came from the formation downhole and into the circulating drilling mud," Garrett said. "Sulfides are odorless, but convert into hydrogen sulfide gas, a highly toxic gas that smells like rotten eggs. No reliable sulfide/H2S test existed for rig use at that time – around 1970 – and lab tests available were too cumbersome for rig use."

The device, still in use today, quickly detects dangerous and poisonous hydrogen sulfide when workmen drill oil and gas wells. This method, along with detecting carbon dioxide, is widely used on rigs and approved by the American Petroleum Institute and International Standards Organization.

"I looked on the GGT test device/method as a life-saving benefit for our industry – useful to avoid serious situations and hazards around the drilling rig," he said. "The whole industry benefits from safe drilling practices."

Garrett retired from Exxon Production Research Co. in 1986. He became a consultant to the drilling fluid industry, where he is still partially active today. Among the most gratifying work, Garrett said, has been the teaching and training of people who daily work on the rigs and who need to know more about the drilling muds on which they must rely.

"One of my proudest moments was last April in Houston when the American Association of Drilling Engineers inducted me into the Drilling Fluids Hall of Fame," Garrett said. "It was recognition by my fellow workers of my technical achievements over many years and only in part for development of the GGT tests. Of the total 14 hall of fame members, many are early drilling pioneers, some now deceased. I said that I personally preferred to be honored now, rather than later. It is much more fun now."

Though he still does some consulting on mud problems, Bob and Altha Garrett are full-time cattle ranchers in Fayette County - near La Grange.

"We prefer staying home, gardening, raising cattle and enjoying the beauty of the rolling hills of our area," Garrett said. "The ranch has always served as a refuge where I'd come back to after being gone for weeks on a trip halfway around the world. Farming and ranching are my roots. It's where I'm comfortable. Fortunately for me, a small oil company recently drilled for and found oil on the ranch.

“I just can't get away from it. It is wonderful!"