Team including two Texas Tech researchers will receive a grant to study water scarcity in the Ogallala Aquifer. 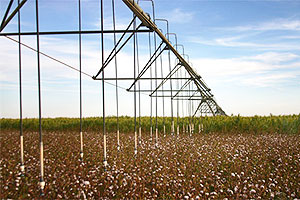 The Ogallala Aquifer provides approximately two million Great Plains residents with everyday water supplies and is the primary source of agricultural irrigation for the region.

Two Texas Tech University researchers are part of a team receiving a $747,528 grant from the National Science Foundation (NSF) to study water scarcity in the Ogallala Aquifer. Researchers Lucia Barbato, associate director of the Center for Geospatial Technology, and Colleen Barry-Goodman, director of the Earl Survey Research Lab in the Department of Political Science, will use the three-year grant from the Human and Social Dynamics competition to study changing societal attitudes towards water scarcity as affected by ethanol production and increasing groundwater depletion of the Ogallala Aquifer. The research team is comprised of four researchers from three different universities. Barbato is responsible for the Geographic Information Systems (GIS) analysis component and Barry-Goodman is responsible for managing the survey. “This NSF grant provides our team with the opportunity to investigate the geographic diversity of societal attitudes towards water conservation alternatives,” said Barbato. “It is a privilege to have the opportunity to work with a multi-state, multi-university team of experienced colleagues in the diverse disciplines of agriculture, economics and geography.” Jeffery Edwards, associate professor of economics at North Carolina A&T University, is another researcher on the team. According to Edwards, the drive for independence from foreign oil will raise hard choices for communities on the Ogallala. Increased production of crops for biofuels will further deplete the already stressed aquifer. Another member of the research team is Gary Pumphrey, an assistant professor in the Department of History at Angelo State University. He said the research aims to allow these communities to determine the most efficient water conservation policy as ethanol production moves forward. Pumphrey added that this is a pivotal time to make decisions about the Ogallala. “Approximately two million Great Plains residents rely on the Ogallala Aquifer for their everyday water needs and estimates are that 95 percent of the water currently being pumped from the aquifer is used for agricultural irrigation,” Pumphrey said. “It is now time for conservation measures to be put in place to insure the future sustainability of the resource.”

The Center for Geospatial Technology is an interdisciplinary center established to promote, facilitate and support applications of geospatial technology in research, education and community service.

The center is located in the Experimental Sciences Building at Texas Tech.