President Bailey presents his vision for growth into a Tier One university, including growth of funded research and growth of the Graduate School. 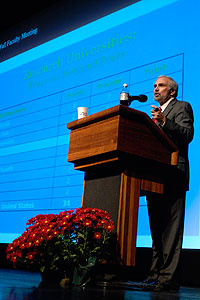 Tier One status for Texas Tech, top-level vacancies and a new way to look at the university’s budget process highlighted the 2008 Fall Faculty Meeting.

Bailey, who became president only two months ago, focused on three priorities, the first of which is filling some vice president vacancies in his administration. A nationwide search is underway for a provost, the university’s chief academic officer. A search committee is in place and a search firm has been hired to assist in filling the position. Jane Winer, former dean of the College of Arts and Sciences, is serving as the interim provost.

Bailey said he is close to naming a search committee to fill the vice president of research position. A search firm has been hired to assist in that search also. Bailey said this is a key position as the university strives to improve its research funding. Bailey hopes to have finalists named by the first of December and people in place in those two jobs shortly after the first of the year.

The final open position is vice president of administration and finance. Bailey said he will move more slowly in filling this position and look at restructuring the office. Beverly Cotton is serving in the interim. She is currently the assistant vice president for budget and resource planning management.

Bailey’s second priority is positioning Texas Tech to be named a Tier One university in the next legislative session, which begins in January. Chancellor Hance echoed Bailey, saying he believes that Texas Tech has already reached Tier One status.

Hance told the audience that while legislators and higher education officials agree that Texas needs more Tier One universities, there is no agreement on how to define, select or fund them.

President Bailey’s third priority is to look at Texas Tech’s budget process with the goal of providing incentives for academic units. He envisions a system that allocates resources in a way that revenue goes back to the units that generate it and allows a unit to predict how much funding it should receive each year.

The chancellor said in addition to pushing for top-tier status, he will work with lawmakers to increase state funding for the university. He also will continue to encourage alumni and friends to contribute to the university to support faculty and students.